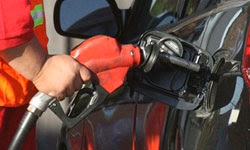 Iran will ration diesel fuel and will add methanol to gasoline in an attempt to manage its stretched fuel supplies, the country’s oil minister announced today. Domestic airliners will also need to pay cash for jet fuel.
The oil ministry is also targeting a surge in smuggling of government-subsidized diesel fuel across Iran's borders.
“The government pays huge subsidies to the energy sector, which has led to the sinister phenomenon of smuggling of oil products,” said Oil Minister Qasemi. “Low prices of fuel play an important role in rising smuggling, and that is why oil products distributor companies should enhance cooperation with security forces to curb oil products smuggling,” he added. (SHANA/Reuters, 14 November)
The subsidized diesel fuel is set at 4,500 rials a liter, less expensive that bottled water.
On gasoline, Qasemi said that it will be blended with about 35 percent methanol to make it go further.
Posted by Nader Uskowi at 8:28 PM

There is only two types of smugglers in Iran,IRGC and non IRGC.
Take a guess which one will avoid the rope?

Not yet to levels experienced by Britain in 1940. Interesting to see where and when this emergency condition reaches equilibrium.

Mark Pyruz....there you go again comparing a two bit tin pot fascist Islamist theocracy to a democratic nation like Britain when they were under attack by a vicious NAZI regime.
The Islamist regime is the enemy of Iran.

don't be too hard on Mark.

of course, his comparison is ultimately silly. Britain had far greater resources and capabilities than does Iran, but still would have been overwhelmed and destroyed, except that Britain had enormously powerful allies, which Iran does not.