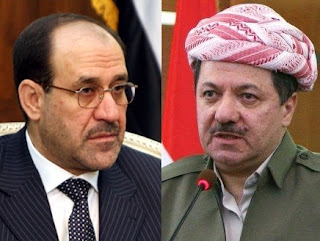 Military leaders of Iraq and the country’s autonomous Kurdish region are meeting today in Baghdad to defuse a military standoff between Baghdad and Arbil governments over oil-rich disputed areas separating Kurdistan from rest of Iraq. On Saturday, the Kurdish government sent reinforcement to the disputed region after Baghdad began deployment of its new Dijla Operations Command nearby.

“If they (Iraqi army) overstep the line, we will strike them,” said Anwar Haji Othman, deputy minister for Kurdish military affairs, on Saturday. (Reuters, 25 November)

Kurds say the Dijla Operations Command is a threat to them and an attempt by Prime Minister Nouri Al Maliki to seize control over the oil rich territories along the internal border that demarcates the Kurdish region. 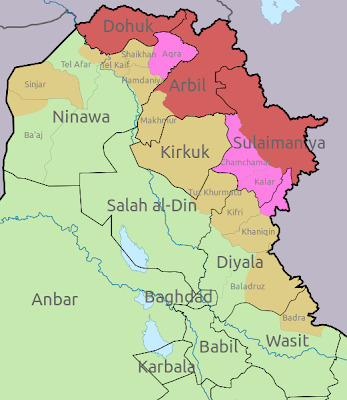 Disputed Kurdish/Iraqi Areas:
Pink: Part of the Kurdish Regional Government since 1991.
Gold: Under the control of central government.

The Kurds might have to be granted their own country with a central government afterall. Iran, Iraq, Tyrkey and Syria shall relinquish territories for this purpose. This would rectify the Kurdish problem - giving them what they always wanted. The aforementioned countries would equally gain a new stability, as such a move would effectively seal off the troublesome areas, hence the security concerns of these countries would be a thing of the past.

If you honestly think Iran, Iraq, Turkey and Syria will acquiesce to the Kurdish demands for greater territorial autonomy then you're in for a rude awakening!

I would agree, the Kurds are a regional nuisance and a pest for all. They have been supporting terrorism, smuggling and gun-running in the area due to lack of central government control. Iraq is about to assert its natural control over this small landlocked province and its does not bode well for Barzani and his terrorist thugs. His father made the same mistake by backing the losing side in the 70's. History is obviously about for repeat itself for the hapless Kurds who have no support in the region due to their miscalculations.