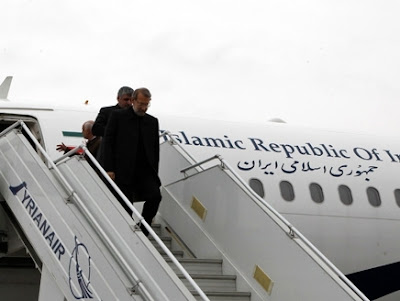 Iran’s parliament speaker Ali Larijani arrived in Damascus today and held a meeting with the Syrian President Bashar al-Assad to discuss the on-going crisis in the country. Larijani will fly to Beirut and Ankara to discuss the Syrian crisis with his Lebanese and Turkish counterparts. (Fars News Agency, 23 November)

Assad is one of Iran’s closest allies and his overthrow by the opposition forces would weaken Iran’s position at a delicate moment during a major power shift in the region. Morsi’s ascendency to power in Cairo and his active role in ending the Gaza conflict could transform Hamas into an Egyptian ally at the expense of Iran, and the fall of Assad would weaken Hezbollah, the other major movement allied to Iran.
Posted by Nader Uskowi at 1:15 PM

The Iraqi has landed.

if Hamas moving toward egypt is no wonder and no problem for iran.

look at the ancient histroy ,

from pharao Ramses II to 1967 was GAZA a part of Egypt.

let assume you are going to Iran for holiday.
how should we call it,
American is landet ?

Many Iraqi's used to be of Iranian/Persian descent before Saddam deported them back to Iran, remember Najaf and Karballah were cities with an Iranian majority.

As for Larijani, he has balls to show up in syria.

Manifestly, Hamas, by being allied with the Egyptian government rather than the Iranian, would be in a vastly more advantageous position.

But it's rather difficult to know what's going to occur inside Egypt in the immediate future and whether Morsi and his party will dominate or be rebuffed and reduced.

3:55 Why can't Hamas retain its alignment with both parties? It would be in Hamas interest to have more than one source of support to lean on, and hence improve its chances of growing stronger. Why would they ever want to break ties with Iran haphazardly? Surely it would be a loosing proposition for them.

Egypt is yet not fully stable, its current ruling authority is still standing on newly laid foundations, whilst the regime in Iran is wholly independant and in a rock solid position.

Also, Egypt has nothing against Iran, and they have expressed wishes of greater cooperation and closer ties with Iran, as both have shared and closely linked interests, which in turn have discovered a potential new partner in the region.

It's a win win beneficient situation for both sides.

3:55 Why can't Hamas retain its alignment with both parties? It would be in Hamas interest to have more than one source of support to lean on, and hence improve its chances of growing stronger. Why would they ever want to break ties with Iran haphazardly? Surely it would be a loosing proposition for them.

Egypt is yet not fully stable, its current ruling authority is still standing on newly laid foundations, whilst the regime in Iran is wholly independant and in a rock solid position.

Also, Egypt has nothing against Iran, and they have expressed wishes of greater cooperation and closer ties with Iran, as both have shared and closely linked interests, which in turn have discovered a potential new partner in the region.

It's a win win beneficient situation for both sides.

It would be rather difficult to retain solid ties with both Egypt and Iran as the interests of the two aren't similar and the demands that would be made of Hamas would likely conflict.

Hamas should by all means woo Egypt and try to retain Iran for the arms and cash while Hamas waits to see if the present regime in Iran continues and continues to be willing to send same.

but Egypt has so much more to offer, starting with the keys to the one gate to the world that Israel can not lock.

Dr. Larajani's visit is just another reaffirmation of staunch Iranian support for Dr. Bashar al Assad who ic now consolidating his position after the US/NATO/Zionist led Salafi terrorists are now being eliminated.

On a more important note, just to educate the ignorant racist set here, almost all Iranians have some Arab blood since losing to the Arabs almost 1400 years. Most of the Shia clerics have moved around in the region from Iran, Iraq, Syria and Lebanon. The most illustrious names are the Al-Sadr, Al-Hakim etc. Under Shah Ismael, the cultural integration with the wider Shia diaspora was promoted even more. Please read some Iranian history before posting sheer ignorance. Najaf and Qom are very closely related, including blood lines. Iran is now the undisputed leader of the almost 200 million strong Shia Muslim world and has wide appeal amongst Sunni Muslims too, as the Hamas successful campaign against Zionists with Iranian support in Gaza just proved.

No.
The Iranian has landed.

No exit strategy for Nuclearyahoo.

Dr Assad will be consolidating his position somewhere far from Syria soon or will be positioned as compost.

Why Israel can't withdraw to its pre '67 bordersline.

WHO IS THAT ONE?

I mean who is that one trying to allienate IRAN FROM ARABS OR ISLAM?so ignoran is that folk!.

FACT ONE- Iran [or PERSIA]is the only power to have accepted ISLAM and become its ferocious defender!.

FACT TWO-The Sunni Shia divide is but an in house feud in ISLAM.

FACT FOUR-AND AGAIN IT IS IRANIANS THAT SHALL LIFT THE PRESTIGE OF ISLAM AND ITS CIVILITY AFTER BECOMING AN ISLAMIC POWER ILLUMINATING UNTO THE WORLD TOLERANT ISLAM!!.

Islam was imposed on Iranians through the sword.

It took nearly 200 years and more to gradually convert Iranians to Sunni Islam.

For over 22 years Babak Khorramdin, a true Iranian fought against the Arab Muslim invaders and was betrayed.

The present Shiite clique are the result of the Safavids from 500 years ago.

The Safavids invited the Shiite clergy from Syria Lebanon and Iraq because Iran had no Shiite clergy of their own. At that time it was a Sunni country.
Iran was therefore forcefully again converted to Shiite Islam by the Safavids.

Last but not least,Iran has washed its body with the politics of Islam and therefor has discovered that politics and religion do not mix.

You haven't a clue what you write about!
I hope you have been a little educated by the "ignoran" folk!

ISLAM IN IRAN ,THE SWORD AND THE MISSING LINK!-in reply to anon 6;58 pm.

It is very easy for any careless historian to blame the sword as per conversion of IRAN to Islam,but an innocent and sincere resercher will easily see how fate and a link became the determining factors in IRANS' conversion of ISLAM.

FACT ONE-Islam do not belong to the Arabs!,no race on clan or Nation ,whether a ruling family or or otherwise is permitted to impose HIS OR THEIR WILL ON ISLAM.

FACT TWO-any historian claiming that ISLAM was forced upon PERSIA by the sword,is a lazy and careless researcher commanding dishonesty!.

FACT THREE-If you say the sword forced Persia to accept ISLAM!,HOW ABOUT THE ARABS, THESE PEOPLE had been living with their idols ,practicing idolatry and slavery in a cruel apartheid cast system society till ISLAM COME TO CIVILIZE THEM.they fought the Prophet of ISLAM cruel wars in a bid to kill him and HIS religion!!HAD MUSLIMS BEEN DEFEATED BY THESE PAGANS ,TODAY ARABIA WOULD BE ALL IDOLS !!yet Islam was not meant for Arabs only.A divine religion for mankind PERSIA included.

FACT FIVE-stop grinding your teeth in rage on the Islamic system and the zeal or IRANIANS in defending ISLAM! blame it all in fate!.

Fact One:Islam was for the unification of the Arab tribes by Mohammad!

Fact Two:When Omar invaded Iran Zamin they ENSLAVED and RAPED the Iranian population.Lot of women were taken to Arabia as SLAVES for their HAREMS!
They heavily taxed the population and treated them like animals.

Fact Three: Islam brought in inequality and SLAVERY into Iran.The ZARTOSHT religion is against slavery and for equality of sexes.

Fact Four: The Iranians believed in a single God 5000 years before Islam was invented by Mohammad.
So don't chat that BS with me.

Fact Five: SALMAN AL FARSI (The cursed one) is looked at as a absolute traitor to all Iranians and the land of Iran.

Fact Six:Reading your rubbish shows who is really grinding their teeth.
Iran under the occupying forces of the gangster Islamic theocracy is holding Iranians hostage by the force of armed Islamist minority of thugs.

Fact Seven: The fate of the Islamist theocracy belongs in the dustbin of history,where it will eventually go!

Ha Ha Ha Ha!
Hey B.M.A,you know where you can go after the Islamic regime has been sent to hell!

@there is a very small group of people among the human race that have a disdain on logic,and ballance.This small group have, do i call it a virtue or vice? that distinguish them from others,this virtue is called 'a fixed mind mentality'!.THEY ARE ALWAYS READY TO MIX A MEAT STEW AND JUICE to win an argument!.they are shewd argumentators who would dive in the sand to snatch a victory!-BUT THE GOOD NEWS IS THAT, IT IS A SMALL GROUP!!

conclusion- may the Almighty guide you away from this intolerant group!! Ameen!

Maybe the god you believe in is not really god but Satan in disguise?