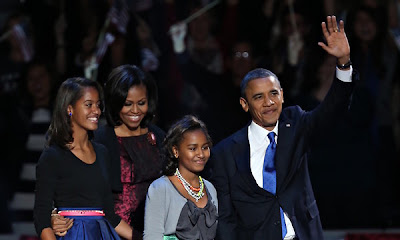 Whoever the U.S. President is, be it Democrat or Republican, both are essentially one and the same, and should definitely be with the full consent of its life-term master, the Zionist Regime of Israel. That's the very tough reason why 'A USA Today' poll shows fewer american people are willing to vote in the 2012 presidential election. What the same old U.S.'s dirty foreign policies applications against the world!

Sloganeering hasn’t helped your cause, and will not do so in future. It’s time to support policies that are rooted on realities and which can help bring back a period of prosperity and peaceful coexistence to the region.

Last night’s election victories were not limited to the presidency and key Senate races, but also included the passage of progressive initiatives across the land, thought improbable not long ago. Historic landslide victories to move the country forward!

NU---- this is not any historic landslide victory and you're quite incorrect in terming it one.

this is simply a correction to the lurch to the right in 2010.

this was not any big endorsement of Obama but instead reflects how the Republican Party has lost the trust of the independent centrist core of the US.

I believe that this election was a manifestation of a historical shift in the country. The traditional white male establishment is becoming a minority, and a coalition of youths, women, minorities, poor and highly educated men looks destined to forming a new working majority. In the next two or three presidential elections, both these trends would be actually reinforced. The establishment poured all they had into discrediting the coalition as “takers” and their PACs spent billions of dollars to defeat not just Obama, but also progressive initiatives on ballot in states like Maryland, Colorado and Washington. And they failed. Obama coalition’s victory was not big, but was very broad and trend setting, a sign of a coming political sea change in the country.

NU--- your reading of the thing is overbroad.

the margin of victory for Obama was the union members (blue-collar males) in Ohio and white-collar professionals in the DC suburbs of northern Virginia...

moreover the Hispanic outrage at the demonization offered by the Republican immigration position is gonna be addressed by the Repubs in short order, as it was something that the moderate element of the party was dead set against.

you'll find that the Hispanic vote is basically conservative and religious and will not stay solidly with the progressive Dems.

Aside from that, let me join you in enjoying the victory.

As in the past, majority self called jews, voted for "Democrats".
It was around 69% and less than in previous votings.

I recommend to be acquianted with a
Univ. of California dean's elaborate regarding legality of the annexation of Mexican territories by the US.
That dean is of Central America's ancestry and questions legality of that annexation of the teritories.
So, the dean is educated and isn't a white male, and should not boder you and other "democrats".

I support mat if he wishes...