Iran Marks Anniversary of Seizure of US Embassy

Angry Iranians gathered in front of the former American Embassy in Tehran today, marking the 33rd anniversary of the embassy seizure on 4 November 1979. The hostage crisis that followed led to 444 days of captivity for 52 American diplomats and the break in diplomatic relations between the two countries. Each year government supporters and hardliners come to the streets surrounding the embassy building to celebrate what is nowadays termed as the “Day of Fighting the Global Arrogance.” (The New York Times, 2 November)
“Today we commemorate the conquering of the castle of Satan!” shouted Brig. Gen. Mohammad Reza Naghdi, the commander of Basij Force, Iran’s civil defense unit of the Revolutionary Guards. “Hear me now, we condemn all sorts of secret talks (with the U.S. to normalize relations)!”
“The Iranian nation will not resume ties with America. There are conditions for America to re-establish tie with Iran. First, it should behave. It should close its military bases in 50 countries. It has more than 86 military bases across the world. Why should a country have military bases in another country?” Gen. Naghdi said. “It should remove its naval ships from the Persian Gulf, Mediterranean Sea and Pacific Ocean and take them to its own coasts.” 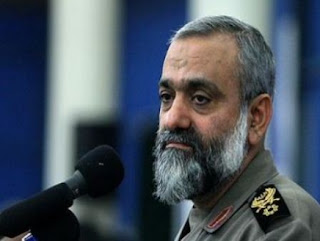 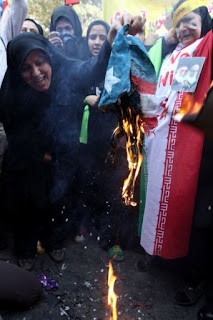 Photo credit: Iranian demonstrators burn a U.S. flag outside the former U.S. embassy in Tehran, marking the 33rd anniversary of the seizure of the embassy. (Atta Kenare/AFP)
Posted by Nader Uskowi at 10:26 AM

Email ThisBlogThis!Share to TwitterShare to FacebookShare to Pinterest
Labels: Attack on US embassy, Iran-US relations

When the Taliban ransacked the Iranian consulate and killed iranian diplomates in mazar al sharif, Afghanistan on August 8, 1998, Iran responded by amassing more than half a million soldiers on the border (1) and was so indignant that it was ready to go to war.

The attack on the American embassy in Tehran is no different than the that of the Taliban against the Iranians consulate. Both were a flagrant violation of international law and should be condemned, to celebrated.

Khomeini made a mistake in supporting the embassy take over and Iran paid for it with more than half a million lives in the subsequent Iraq Iran war that would have been unlikely without an American green light to avenge the attack on the embassy.

Iran should issue an oppology instead of celebrating it every year.

Iran should indeed issue an apology, but let's not forget that embassies in the history of Iran were used as a 'spy nest'. One should read about the CIA coup in 1953, where as a result the democratically elected prime minister of Iran, Mossadegh, was overthrown.

It's the fault of US and UK themselves that Iranians have always been skeptical about foreign embassies.

Thanks anon 1:10
I am not surprised as such programs are allowed to vent on and off, but nothing substantial really follows. Thanks for sharing.

Not to state the obvious, but embassies around the world serve their countries in any way they can, including supporting their foreign intelligence. Why else would they have so many cultural attaché-s. even if all the American hostages were proven to have worked for the CIA, they were supposed to be protected in their own embassy grounds and the entity doing the protection should have been the host country government, not just the marines.

Mossadegh was chosen by the Shah and approved by parliament.
What democratically elected government?
Mossadegh was answerable to the Crown by constitutional law.
I am sick of people who falsely claim Mossadegh was elected democratically by the people.
Mossadegh tried to gain more power and went against the written constitution and tried to close parliament down,which in the end backfired on him.
All these false claims that the Shah was parachuted down and became dictator by the overthrow of a democratically elected government is fabricated by the Melli Mazhabis and religious fanatics.
The very same people made those lies up that are ruling Iran today.
I know I will receive a few "facts" from some critics on this blog regarding this issue,but it's OK.

What is most important, he said, is for the United States to realize that by imposing sanctions on Iran, it has become a domestic player. Iran’s leaders fear that the White House is secretly trying to use domestic political factions to engineer a change of government. “Instead, the U.S. must allow us to rebuild our domestic politics and recognize Iran as it is,” Mr. Abdi said.

I pity Iran run by such pitiful looking rabble.

Since when does a Iraqi by the name of Naghdi speak on behalf of the Iranian nation?
Oh,wait a minute,since the advent of this colonial anti Iranian fascist Islamic theocracy.

it was the world that agreed to the sanctions, and agreed but slowly. the government of Iran had years to do things to avoid coming under the sanction regime lately imposed, but did nothing other than deny and defy.

unless and until that changes, Iran's government can count itself fortunate that it's only economic and diplomatic measures that are being brought to bear.

without Iran's government accepting change, change will be imposed. there will indeed be aid, in near future to Iranian's inside the country, who will fight for a new government.

those people are there, but for now they will not accept aid from Western governments.

that will change if nothing else does.

Looking at "General" Naghdi has truly blackened the meaning of General of any army.
It's an absolute disgrace!

I see some of their Fati commandos and Battoleh haj khanoms have turned up for an outing,LOL!

What a bunch of sad losers.