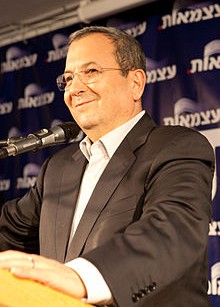 Israeli Defense Minister Ehud Barak today announced he was retiring from politics after a half-century career in the military and government that included two years as prime minister. Barak’s surprise announcement will shake up Israeli politics just weeks ahead of general elections. Mr. Barak will stay on as defense minister until a new government is formed following the January 22 elections.

“I didn’t make this decision without hesitating, but I made it wholeheartedly,” Barak told reporters in Tel Aviv. “I feel I have exhausted my political activity, which had never been an object of desire for me. There are many ways for me to serve the country, not just through politics,” Barak added. (AP, 26 November).
File photo: Ehud Barak (Weakipedia/AP)
Posted by Nader Uskowi at 6:22 AM

It's a move prompted by the deal Netanyahu made with Lieberman whereby should Netanyahu form the next government, Lieberman gets to choose whether he will take the portfolio of Defense Minister that Barak currently holds.

After the disaster by the Zionist child-killing warmongers in Gaza, it was natural to find a scapegoat, and this loser seems to have filled the bill.

Israeli Defence Minister Ehud Barak, a leading strategist in confronting Iran over its nuclear programme, said in a surprise announcement on Monday that he would quit political life after the January 22 national election.

He apparantly jumped before being pushed after the humiliating Gaza campaign that strengthened both Hamas and Iran.

His departure also highlights the policy paralysis in the Netanyahu government which after years of bluffing and sabre-rattling on Iran has now become unrattled as there are more cards to play as Europe and the US seem set to negotiate a modus-vivendi with a resurgent Iran basking in the glory of its weaponry in the hands of its Gaza Hamas allies.