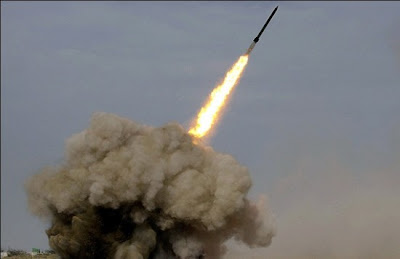 Citing Israeli officials, The Sunday Times reported today that Israeli intelligence satellites have observed the loading of Iranian Fajr-5 rockets in Sudan destined for the Gaza Strip. Fajr-5 rockets were fired by Hamas and other Palestinian groups into the Tel Aviv and Jerusalem areas during last week’s Gaza conflict.
Last month, following an airstrike on a weapons plant near Khartoum, Israeli Defense Ministry accused Sudan of acting as a transit point for weapons shipment to Gaza, including Fajr-5 rockets.
The Times report also cited Israeli officials speculating that Iran could be moving longer-range ballistic missiles into Sudan, which could be aimed at Israel from that country.

Since some of the adults here try to initiate a serious and educated discussion. It is time to undertake a military analysis of the Zionist Gaza onslaught on mostly unarmed Palestinian civilians with US deadbeat taxpayer supplied 21st century weapons.

The most amazing FACT that has been known to anyone with military experience is the completely unprofessional conduct of the Zionist military rabble that was massing in the olive groves in North Gaza or the the Eraz/Sderdot area. The so-called Zionist soldiers had total air cover and quantum superiortity in weapons but still scared and unprepared for urban warfare with ragtag Hamas freedom fighters whose heaviest weapons were AKs, RPGs, mortars and some rockets. Hamas simply did not have either artillery or any SAM systems.

Despite these glaring military deficiencies on part of Hamas its fighters had a deterrent effect on the Zionists who are simply casualty averse and did not have the stomach for gruelling urban combat in rubble. The Zionist cowards, like the Americans use massive air campaign to terrorize the civilians, but recent air campaigns against civilians, like in Vietnam, Lebanon (2006), Afghanistan and now Gaza have shown, these savage methods lose their "shock and awe" impact against a dug in determined foe and creates more anger and resistance.

The Zionist rabble also showed very poor military standards by their unkempt appearance, soldiers eating out of picnic coolers, wearing running shoes with a complete disregard to any military professionalism. The only reason the Zionists could mass such large numbers of tanks and armour in the open was the lack of artillery or multiple barrel rocket area saturation weapon systems amongst Hamas. If the Zionists pull this type of idocy in front of a professional army like Iran, Syria or Hezbollah they would suffer huge loses from airburst artillery, missiles, rockets, ATGMs and even air attacks on their armour and infantry marshalling areas.

Another important fact in this mini one sided slaughter was the Zionist population's pyschotic response to a few outdated rockets which totally paralyzed their population centres for over a week, despite the Iron Dumb hype. Imagine what the Zionist chaos will be if Iran or Hezbollah literally rain down thousands of rockets, missiles and artillery on Zionist hovels?

It is quite apparent to anyone with any combat experience that the Iranian Fajrs and other missiles have created an aura of deterrance in the region. So far the Zionist civilian centres never faced any threat and now they are totally vulnerable. This message has not been lost on either Iran, Syria, Hezbollah, Hamas, Egypt or anyone that saw the Zionist panic and inability to engage in a ground war.

Egyptian General Saadeddin Shazli, the mastermind of the Suez Crossing in 1973 had conducted such a visionary analysis of Zionist strategic weakness back in the 70's. The successful Egyptian campaign of Crossing the Suez is well researched in Iran and regional military academies. The simple strategic calculus does not favour the 6 million imported luxury oriented Zionists who are only suviving in the region on US weaponry and by terroring Arab civilians. Iran with its missiles, massive strategic depth and infinite resources coupled with a battle-hardened military has exposed the Zionist weaknesses for ever and changed regional military dynamics.

The most important FACT known to most of us is that the Zionist bluff has been called and proved to be totally hollow. They are no match for Iran and will never again talk about "striking Iran". This will be their death wish and definite end. The Fajr's surely won the day. Zionist cowards have been put on notice, they are on STOLEN LAND and on BORROWED TIME in an increasingly hostile region as US power wanes on all fronts.

Soon as we hear the word "Zionist",you know the rest is BS!

Having won this round and having learnt some valuable insights, both Iran and Hamas are striving for better delivery systems, including low trajectory weapons to neutralize the Iron Dome (also known as Iran Dome).

If the Sunday Times report is correct, Iran is hastily re-arming Hamas and its regional allies after the valuable lessons learnt. Given that Iran just handed them an abject lesson in how attacking the vulnerable Zionist entity can strengthen their standing as a world player, how long do we really expect Zionism to last in view of new regional geo-strategic realities?
The new rule of thumb for the resistance front states seems to be: lob a few hundred rockets into Occupied Palestine, and the world will treat you like you deserve respect.

The Zionist Gaza debacle will have wide ranging military implications for Gaza as well as strengthening the Salafist/Wahabbi groups dedicated to the eradication of the Zionist entity. A Salafi takeover of Syria would spread the conflict to occupied Golan Heights as there is already a proliferation of weapons in the region. Zionists now face multiple hostile fronts as Egypt teeters.

Anonymous 10:05 PM. The only BS here is from you and the zionist war criminals that you try to distract attention from.

So what if any weapons are going to Gaza? The occupied Palestinian people are entitled to self defence.

I don't give a damn about the "Zionists" but the dirty Islamist occupying criminals in my country,Iran.
If you're so concerned for the Palestinians go and commit suicide for them and leave us Iranians to worry for our own.

and those rockets aren't for defense but for firing at random Israeli civilians.

all they do is kill a few poor souls in Israel ....and get a whole lot more hapless Gazans killed in return as Israelis have an equal right to self-defense ...and a heck of a lot more and better weapons.

You clowns can never hurt Israel....stick to killing women & children.....or at least have the guts to face the Israeli military you bunch of cowards!!!

You are right, the Zionist cowards despite billions in US deadbeat taxpayer aid and 21st century weaponry still can't defeat a bunch of underfed and armed women and children in Gaza Gulag by the sea. Zionist days in OCCUPIED PALESTINE are numbered, so the hasbara bloggers are embarassed and scared.LOL.

What Iran and Hezbollah learnt from Gaza as Iranian engineers visit and conduct an analysis?

What the Iranians, Hezbollah and Palestinians learnt from the Gaza mini-war was that their strength against the Israeli defense system lies in numbers: the bigger the multiple missile barrage, the greater its chances of penetrating Iron Dome cover and reaching urban targets. They accordingly put together large batteries of 6 to 8 rockets each side by side and fired them all at the same time from underground silos.
The launchers were then folded back underground for concealment.

The Iron Dome also offers no capability against low trajectory artillery fire and massed mortar fire. Iran and Hezbollah can concentrate mass and rapid fire that can overwhelm any countermeasures. The future for Israeli cities is looking very gloomy.

You and Israel are the real clowns. Israel should have the guts to face Iran, not the other way. After all, Israel has repeatedly threatened to attack Iran for more than a decade despite having never actually carried out their threats. Israel's blustering expose them for what they really are -- a bunch of yellow-bellied cowards.

Anon 1:26 AM. That's true. The zionist regime and its internet keyboard warriors are the real clowns. So much bluster from them against Iran yet they do nothing. All they are good at it occupying and murdering poorly-armed civilians . When it comes to a big and powerful country that has a serious capability to fight back, like Iran, all they can do is bark. All the zionist regime regime can do against Iran is talk.

Anonymous 5:47 PM. They are more defensive than the white phosphorous and other American weapons used by the IOF (israel occupation forces), paid for by the American people, through their taxes.