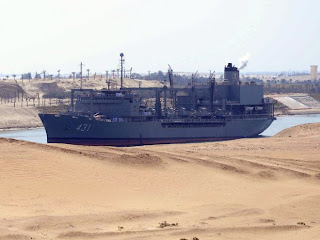 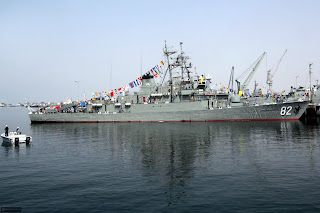 The Iranian Navy’s warships of the 22nd Fleet returned to their base at Bandar Abbas after completing a 75-day mission in international waters. The fleet included IRINS Admiral Naghdi corvette (FS 82) and IRINS Kharg (AORH 431). The fleet had been dispatched to the coasts of Djibouti and Bab el-Mandeb Strait and visited a Sudanese port in the Red Sea.

It's amazing those buckets can still float!
22nd fleet,LOL!

Kharg is the most interesting and useful ship in the IRI Navy.

More rubbish from a dunghead.

Your pathetic and childish comment shows your lack of intelligence.

The "dunghead" types are the ones occupying Iran,which you so sheepishly worship.

So show some respect to your "dunghead" from afar!

@Mark Pyruz,without proper air cover the Kharg will just be another "useful" target for the US navy.

Mark says "very" carefully, that ship is most interesting...
He should add, as a "military expert?" that during its trip to other countries it could bring in or out interesting loads, which may include missiles' components for air defences.

Please do not submit this info to "certain" agencies.

Mullahs in their infinite ignorance have largely ignored investing in modern weapons systems. Iranian navy is literally a bucketload of rusted 70's vintage frigates. The mullahs mismanaged relations with Russia, Ukraine or ex-Soviet states in the 90's when they could have obtained modern ships and refitted them with new weapons systems like India and China are doing. Iran simply can not manuafacture a naval vessel in excess of 1500 ton displacement.

The only way Iran can modernize its naval weaponry is to buy foreign hulls and then refurbish them. Iran's airforce, army and navy are now the most obsolete in the region. Only its size, asymettrical warfare capability and missiles are keeping some semblance of deterrance. The poor state of Iran's military is disgusting.

They did procure additional equipment from China, Russia, Belarus and Ukraine: J-7s, Su-24s, Su-25s, Mig-29s as well as various Air Defence Systems, SAMs, ASMs, AShMs, ATGMs, APCs and improved T-72 MBTs. Alot more than you could envisage. In reality they have spent large sums of money on military hardware, but in your ignorance you chose to limit your thought process.

It's very difficult for Iran to obtain large warships, not because of any assumed wrongdoing by a Mullah, but because of two principal reasons, one is that huge warships are extremly expensive and are not priority number one in the calculus of the Iranian defense doctrine, secondly even Iran's allies are carefull in not allowing Iran to become all too powerful, that's why their governments won't authorize the export of such hardware.

A so called 'blue water' navy equals the ability to project power, it serves to provide the owner with an offensive capability and enables Iran to keep the Strait of Hormuz in a stranglehold (something the Russians and Chinese are very well aware of since a blockage of that crucial spot would have an adverse effect on them as well and therefor they would rather not see Iran be able to do such a thing), besides Iran isn't at all interested in attacking other nations.

You're right,Iran's equipment is vintage 1970s Shah era.
The laughable part is the mullahs parade this equipment around and claim to be a world power!
It's no good having any 3000 ton ships because Iran's air force is incapable of protecting the fleet with their old flying junkyards.
In fact every time the poor Iranian pilots get into those rusty old flying coffins they say a huge Salavat and sign their last will and testament.
This is the result of 34 years of mullah infested backward rule, which has resulted into nothing but a farcical wing and a prayer.
Years ago I used to laugh at countries like India,Saudi Arabia with their old MIG 21s and British Electric Lightnings compared to Iran's very advanced Phantoms and F14 Tomcats.
Even China's air force consisted nothing more than MIG 15s,19s and MIG 21s pieces of junk. Now they are laughing at us with our rusty old museum pieces.
Look at our old tank the Chieftain and compare to the deathtraps like the T72 and T55 which Iran purchased in the 1990s,then you will notice the total degradation of the Iranian armed forces of today.
In a few years time the Iraqi armed forces will have a better and more modern weapons than Iran's.
Add to that Turkey,Saudi Arabia Qatar and UAE and even Pakistan and you can see Iran's equipment has slipped into third rate position.

That's right the regime is not interested in attacking other nations because they know what will happen to them.
So instead the regime attacks the Iranian people in pursuit of their freedom from a bunch of savage occupying terrorists.