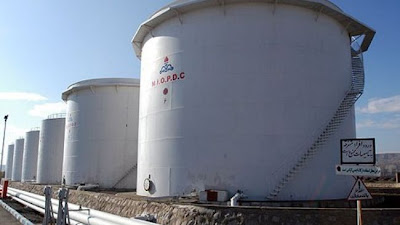 Iran has announced that it will build new oil storage facilities in the Persian Gulf to store over 8 million barrels of crude oil in addition to its current storage capacity. Mahmoud Zirakchian-Zadeh, the managing director of the Iranian Offshore Oil Company (IOOC), announced the new storage tanks will be built within nine months near the Bahregan oil field in the northern Gulf. (SHANA/Press TV, 26 November)

File photo: Press TV
Posted by Nader Uskowi at 7:57 AM

Well if the sanctions ever stop Iran will be able to literally flood the oil market. This could be worrisome for some ventures where the extraction cost is much higher then in Iran(tar sands, fracking).. Iran could've played this one better according to me.. building these storage units much earlier and lowering their production rate faster, investing in refining before the sanctions took their toll, building more natural gas infrastructures, etc.

The fact remains that if Iran were able to sustain such low output for a few years they would have a great hand seeing how other producers are raising their output to match the missing Iranian oil, meaning the price of reaching oil outside Iran will necessarily be bigger then the cost inside Iran...All that remains to be seen is who will be in power and who will profit from this sacrifice (I'm not suggesting this was intended, at least not to such an extent).

will having to store the oil for years cost nothing?

and is stored oil somehow free of the cost incurred to extract it?

no&no but as the price goes up the lowered output assures more accessible oil when the sanctions stop... It's just a fact that oil extraction is costing more and more as the price of it goes up... if Iran doesn't sell its cheap oil now... it can do so later.

the part about storing is just a way to make sure they could hurt other producers by lowering the price by augmenting their offer, or make use of opportunities when they present themselves.


perhaps you're confusing the idea that as prices rise, it becomes profitable to extract where costs are high and profit previouslt absent.


however when Saudi Arabia pumps more to offset the absence of Iranian crude, it doesn't cost the Saudis more per barrel....might cost them slightly less.

Iran has played its oil card very smartly and has not discounted its oil, but stored it as global energy demands, particularly in Asia increase pushing prices higher. The so-called sanctions have had a minimal impact as Iran had been preparing for such a contingency for years. On another positive note, Iran is finally paying attention to beefing up its navy. Hopefully, this blog will download the photos from Iranian media.

Iran to unveil new naval vessels
Speaking to reporters here in Tehran on Monday, Iranian Navy Commander Rear Admiral Habibollah Sayyari said that the home-made Sina-7 missile-launching warship will be unveiled on Wednesday on the occasion of the National Day of Navy.

Sayyari added that the main structure and the second phase of the construction of Sina-7 warships has finished.

Sayyari announced that the Navy will start the second phase of the construction of Sahand destroyer in Bandar Abbas, the main structure of which was launched in September.

"On Wednesday, two Qadir-class submarines as well as advanced simulators for training Qadir submarine crews will be unveiled and put into operation," Sayyari added.

The commander further said that two hovercrafts, the BH7 hovercraft overhauled by local experts and the home-made SRNX hovercraft, dubbed as Tondar (Thunderbolt), will join the Navy on Wednesday.

Earlier this month, Iran unveiled a highly advanced Tondar hovercraft which can launch missiles and serve as launch pad for drones.

Tondar can be equipped with different types of weapons produced by the Iranian defense industries, including rockets, guns and Unmanned Aerial Vehicles (UAVs).

hope these new targets are below ground

---- Iran has played its oil card very smartly and has not discounted its oil, but stored it as global energy demands, particularly in Asia increase pushing prices higher. The so-called sanctions have had a minimal impact as Iran had been preparing for such a contingency for years.------

no money coming in and people are getting lectures telling them not to use so much sugar....

Actually the only people whining about the sanctions are spoilt brats in North Tehran and the usual self-hating exile transplants who are professional whingers anyway. Even if Iran was the number one economic power they would still find some reason to vent. Get over the FACT that Iran will endure OIL or not. A few brats with sweet tooth and gelled hair will hardly bring the government down.LOL.

@ anon 7:26
I'm not talking about existing facilities... but the new ones that get exploited as the older ones don't supply enough

The SPOILED "brats" you're implying are the children of thieving rich mullahs and their servants which live in LA and Toronto. Laughing all the way to the bank with the stolen money which they have taken from the throats of the Iranian people,so that they can chat BS on the blog like you.

---"I'm not talking about existing facilities... but the new ones that get exploited as the older ones don't supply enough."---


since the prices aren't rising, but instead have fallen in the past year, and the stocks of oil remain high because the demand isn't rising..... and considering that lag time involved in bringing newly tapped fields imnto the supply stream, I'm gonna have to say that you've got to be expecting Iran to be barred from the marketplace for at least 3 more years.

That's fairly unlikely ...as the present government wouldn't last that long if that happens....and the next regime isn't likely to be sanctioned.

@anon 5:22
I was looking more along the lines of 5-10 years... one can be surprised by the resilience of certain regime(just look at cuba and north korea).. You might be right and this pretty much just becomes speculation... all I'm saying is if the Iranians get in a situation similar to the previously mentionned regimes, they will have an ace up their sleeve that neither had(cheap accessible oil).