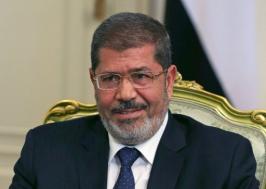 Cairo and Tehran severed diplomatic relations after the 1979 Islamic revolution in Iran. Morsi’s visit will be the first by an Egyptian leader to Iran since then.

Maybe he will ask for some money, and of course the Islamic regime will accommodate.
Meanwhile our people are still buried beneath the rubble after the earthquake.

So the Iranian prez is seated next to the Saudi King at OIC, and the Egyptian prez is going to Tehran? Wow...Iran really is isolated isn't it.

This is the prime moment for Israel to strike, when the Islamic world is divided. Good luck to 'em.(sarcasm alert)

"So the Iranian prez is seated next to the Saudi King at OIC,"


The Saudi King allowed the lapdog to sit beside him.And Iran is hosting NAM this year with Morsi attending.So what's your point?

But this still doesn't change the fact that our people are still under the rubble of the earthquake. And the Islamic fascist theocracy is isolated from the Iranian nation.

even Saudi,qatar and emirate offered millions to mursi, not to go to tehran.

and of course these Earthquake is the most important issue in histzory of iran.

I believe Iran needs 100 Years to recover from destroying some remote villages.
:>

The earthquake is the most important issue in Iran,when you have people still buried under the rubble.

How would you feel if your loved ones was still buried under the rubble and the leadership jetted off to Saudi with little mention of the earthquake?
You believe what you like,but stop being an apologist for the regime at the cost of the Iranian people.


neither the Earthquake with small damage in Small Remote villages is relay a important issue,
it is only an accident, like car accident , neither it has any relation with NAM Meeting with presence of president Mursi.

Small damage!?
You insult the suffering Iranian people.
You are obviously not Iranian.Maybe you are one of their boys from southern Lebanon?
It explains a lot about your heartless kind.

I donot insult the suffering of the people but I insult rather your intelligence, which is obviouisly childich.which can not or wont to distinguish between a limited regional disaster and country wide disaster.

did you helped ever for example the people in Bam Earth Quake ?
did you ever donated money for this Earth Quake ?
by the way
The Boys of South lebanon are brave and fearless, they bind the israel Armee and prevent them to
attack iran.
They are fighter against a good Military power like Israel.
they habe my full respect
They are more iranian than Exil Iranian in LA.
did you fought in Iran-Irak War ?
if you did not, Than you are a nobody.

"neither the Earthquake with small damage in Small Remote villages is relay a important issue,it is only an accident,like an car accident,...."

It wasn't a "accident". It was a disaster you prat.
If you haven't anything better to say,just plug it.

neither donate somne thing for Bam, nor for This Earthquakr, nor fought in Iran-Irak war
and finaly not a reasonable person
that can breing any reasonable arguments


Before you start criticizing my intelligence learn how to spell and go and read some books.
Then in ten years time when you're mature and educated enough come back for your exams.