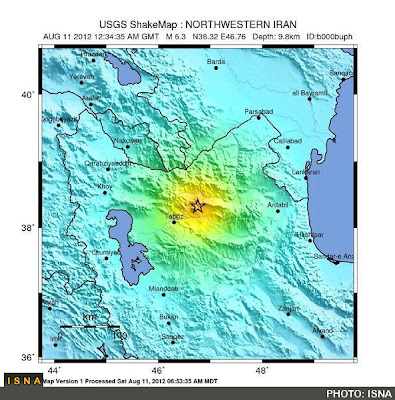 A powerful earthquake struck northwest Iran on Saturday, killing at least 87 people and injuring more than 700.

UPDATE: The numbers of causalities have risen to at least 250 dead and more than 2,000 injured. The officials feared the numbers would rise.

Epicenter: 38.324N, 46.759E
Photo Credit: Map of the area, with a star designating the epicenter of the earthquake. USGS/ISNA
Posted by Nader Uskowi at 11:56 AM

A Sad reminder that Tehran is not ready for the big one of it ever happens.

MR MD ,NATURAL DISASTERS LIKE THIS DESERVE KIND WORDS! if you are judging Iran's capabilities against its handling of disasters then you are very far from the reality!remember Katrina USA,tsunami JAPAN,blood chilling earthquakes in CHINA!and don't forget forest fires in ISRAEL AND RUSSIA.THEIR RESPONSE WAS POOR EXCLUDING CHINA!!

So Khamenei doesn't utter a word regarding the earthquake and the other one has jetted off to Saudi Arabia.
Meanwhile the regime claims it cannot obtain medicine for the sick people in our country because of the sanctions,yet they can easily obtain 200 plus armored Mercedes Benz Limousines at a cost of One Billion Dollars.
Shows where the priorities of this regime goes too. Conferences and buying 200 bullet proof limousines.
Meanwhile the poor people of Azarbaijan are buried in the mountains.

And a little message to B.M.A.

Although I don't agree with some of the things Jabbar Fazeli MD writes,on this one he is spot on.
Just because you support a dictatorship doesn't mean you should close your eyes to reality.
There are buildings in Bam which where destroyed in an earthquake ten years ago and still the area looks like a war zone.Same goes for Khoramshar in Ahvaz which parts still remain in ruins since the war with Iraq ended in 1988.Jabbar knows what he is talking about regarding this issue.

BMA--- you're making odd comparisons.....that are far from exact and none too worthwhile.


earthquakes are not all that uncommon in Iran and there's no reason not to expect them...or to plan for them.