If Israel Attacked Iran Alone, ‘It Would Remain Alone’ 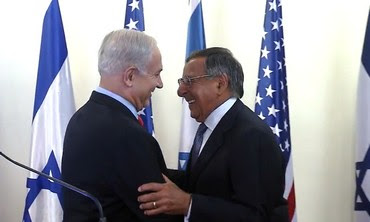 The Times of Israel, quoting a news report by Israel’s Channel 2, reports today that irritated American officials are telling Israel that it is overplaying its hand with its constant warnings about time running out on stopping Iran’s nuclear program and its threats to launch military action against Iran. (The Times of Israel, 1 August)

The U.S. is telling Israel, Channel 2 reports, that while an Israeli strike could damage the Iranian program, an American strike, if deemed necessary, would finish it; and Israel ought to stop talking about deadlines.

The report also quoted an unnamed Israeli insider as saying that if Israel attacked Iran alone, “it would remain alone.”
Photo Credit: SCREENSHOT/JPost
Posted by Nader Uskowi at 9:51 PM

I love to hear this. I'm tired of the dog (Israel) walking the master (US). Please don't read any racism into that, it's the best analogy I could think of. And please don't even start with the zionists controlling the West, etc.

... How 'bout the zionists are "conning-&-trolling" the West?

Israel's 'dreaming' of attacking Iran's peaceful nuclear energy installation is all 'bull-shit'. Israel VERSUS Iran is just like a zionist paranoid little mouse TO a brave big persian cat. What a poor Israel!

if you want to go to hell you may go alone. we are not interested with it.as a result the dogs are just bluff

The Torah states in Genesis 12:13 By the writing of Moses "I will bless those who bless you, and whoever curses you I will curse; and all peoples on earth will be blessed through you." Romans Chapter 11 in the New Testament concurs the same.
(((So don't claim Abraham to be your father if you don't listen to Moses !))) From a gentile man in the U.S.A. Yashua will break in pieces all those who hate Israel! Repent! And hear Moses words. Repent!Abraham is not your father!

5 previous comments and all so poor that Todd's stand head and shoulders above the others.

How com most all those Moses' people denies not only the Christ but the existence of the God ???