Khamenei Calls for ‘Economy of Resistance’ 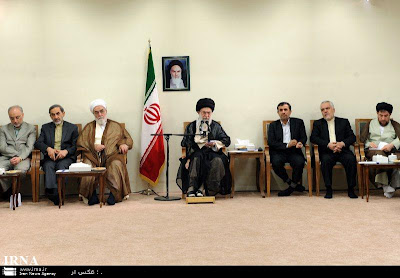 "The arrogant powers are pulling their weight to force Iran to back down and the government should invalidate these illusions by using the nation's full potentials," Ayatollah Khamenei said. "In this kind of economy (of resistance) the nation's progress is preserved and vulnerability of the economy against the enemies plots is decreased." (IRNA/AFP)

Khamenei made the comments during a meeting with President Ahmadinejad and his cabinet members.

A slew of Western sanctions have slowed Iran’s industrial activity, reduced foreign investment, soared inflation and led to a shortage of foreign currency. An oil embargo has also reduced the country’s oil exports by nearly 50 percent and cutting its oil production to the lowest level in more than 20 years.

This coming from a man that had his £3 Billion frozen in British banks.That's why his goons attacked the British embassy in Tehran.
Oh,and what about the money laundering with the help of Royal Bank of Scotland,Standard Chartered Bank and countless other "satanic" western banks.

Yeah sure,death to America and Israel and Britain.
But remember this you hypocrites don't bite the hands that helped and maintained you into power,namely the West.
You people were put into power to destroy Iran and rape and kill its people so that the country can be torn apart and bits of its wealth given to China,Russia and god knows who else.
This anti Iranian regime is the most filthy in Iran's history.

"This anti Iranian regime is the most filthy in Iran's history."

That's nothing compared to the Shah's regime which is more filthier than the current regime.

Trust me,there is nothing more filthier than a bunch of hypocrites pretending to be holy by wearing their religious uniforms,while behind the scenes they do all types of fornication.
Now go and frazzle someone else with your nonsense.

"That's nothing compared to the Shah's regime which is more filthier than the current regime."

I,m a republican and I would rather live under the Shah's regime than this so called Islamic "republic".
Anon 1:58 PM is right.This regime is the most filthy in our history.

Anon 7:30 AM.....Marrying off 9 year old little girls to fully grown men in their twenties and beyond.

Kidnapping village girls in Iran and selling them to Arabs in U.A.E,Lebanon,Syria etc..

Building houses for free in Iraq and South American countries to better their lives,while our people are living in mud houses.

Building schools in those countries for free while our children have to do with old rusty
buses.

Giving our oil and resources away for free to the Chinese and Russians so that the regime receives their support in the UN as regards the nuclear issue.

The Russian built nuclear reactor which for ever going on line, while the Russians are milking Iran for all it's worth.

Qatar stealing our gas from the PARS oil field in the Persian gulf.

Since the so called revolution Iran is importing even the most basic of things at enormous inflated prices.

They say death to America,yet they import millions of tons of wheat from the "great Satan".

They say death to England,yet they launder the stolen money in British banks.

They say death to Israel,yet during the Iran Iraq war they received arms from Israel.

They say death to Israel,yet they bought the latest surveillance equipment from them to spy on our own people.

Blackmailing families with ransom money or worst execution if they cross their red lines.

Anon 7:30 AM...the list can go on and on as regards this hypocritical anti Iranian and anti human filthy fascist terrorist theocracy.