Khamenei on Tweeter: Attack on British Embassy in Tehran Was Wrong 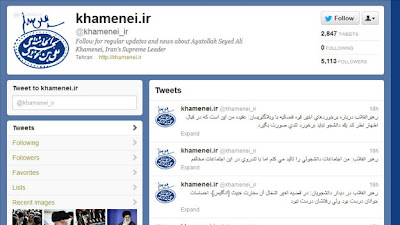 Iran’s Supreme Leader Ayatollah Ali Khamenei tweeted today that the attack on the British Embassy in Tehran by a group of radicals last November was wrong. The ayatollah, who has recently started his Twitter account (@khamenei.ir), actually his office tweets for him with thousands of followers and no followings, said this on the episode:

“On that recent subject of the wicked (British) embassy, the emotions of the youths were correct, but their entry was not right.”

Nine months after the attack, which led Britain to the break up its diplomatic relations with Iran, the supreme leader is saying the action was wrong, and saying it through a tweet. Interesting times we live in!

Photo: A snapshot of Khamenei’s Twitter page today. The third entry in the page relates to the subject here and is translated above.
Posted by Nader Uskowi at 4:07 PM

Too little too late! (my thought exactly)
The consequences of this little repeat of the US embassy attack was the European union deciding that, despite the poor economy in Europe, it was worth it to boycot Iranian oil all together.
The Iranian regime bit more than it can chew and it didn't know it, until nine months later.

What are you guys on anyway? The British were lost in Iran, the attack gave them an excuse to look tough after Iran chastised Britain.

The EU "decided" to sanction Iran after they were told to do so by the US. You know the kind of "sovereignty" promoted by you people.

Then you you say "it was worth it to boycot Iranian oil all together"?

How come when Western leaders make rash, emotional policy that harms their citizens it's lauded as being "worth it".

Remember 7/13/12 "UK Says It Foiled Iran Nuke Weapon Drive" with John Sawers (M16) acknowledging for the first time in history that Iran can be trusted with nuclear weapons since 2008? This is the diplomatic response from the Supreme Leader. Once you understand the use of the word 'foiled' and the offer of 2014, it begins to make sense. This may be the breakthrough I have been hoping for...

You cannot be serious. He was talking to university students in the month of Ramadan. The issue came up and he addressed it. (Students talked first, and then he gave a speech in which he addressed some of the issues. And yes, his office tweeted this.