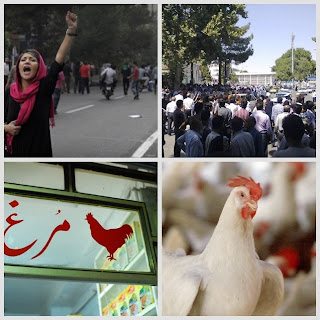 The Iranian opposition leader and ex-presidential candidate Mr. Mousavi was taken to the hospital this week with a life threatening cardiac condition. This event injected new energy into the opposition movement (at least on the web), and may have far reaching, and unforeseen, consequences.


This naturally occurring event has, somehow, raised the stakes in the political struggle against the regime in Iran. Prior hostile statements from the green movement were directed at, and limited to, president Ahmadinejad and his government. It is a major shift for the green movement to openly and directly attack the supreme leader (the real dictator of Iran). By the green movement, I mean it's leaders and not the poor revolutionaries on the streets, who already risked their lives a few years back shouting anti-Khamenei slogans. At the time, the opposition "leaders" chose to remain committed to working within the Islamic republic system; much good that did them.

In 2009 post election semi-revolt, the green movement leaders, Karoobi and Mousavi, made it clear that they were not committed to what their followers really wanted, the overthrow of the Iranian theocracy. This timid stance, left the revolutionaries on the streets in "no man's land", and discouraged many ordinary Iranian from joining the green movement.

The indecisive leadership, or lack of leadership, in the face of the brutal "shock and awe" tactics by security forces, doomed the pacifist green movement to failure. Three years later, the green revolution legacy is hundreds of deaths, thousands of political prisoners, many more self-exiled rank and file, and a top leadership under house arrest dying of old age.

Three years ago, the green movement could have been the beginning of something huge in Iran; Mousavi could have chosen a different, more defiant, path of courage to match the heroism shown by his young supporters who staged peaceful demonstrations under a de facto Marshall law.

Instead of fully committing to the revolution on the streets and risking prison, Mousavi and Karoobi got one and a half years of humiliating house arrest for their, attempted, half ass "revolution light".

Instead of taking it to the next level and risking death as a hero, Mousavi may now die at age 70 from a heart attack. In hindsight he might have preferred the legacy associated with the first option, the heroic death that triggers true change in Iran.

Instead of galvanizing a revolution and leading the nation into a new era, we now have a beaten down leader, withering away under house arrest. It would be an extreme irony if Mr. Mousavi was to become more impactful in illness (or death), than he ever was at the height of the green movement.

In any case, the green movement's only way back into the political arena is to join the upcoming "chicken revolution", when Iranians revolt en mass to protest chicken prices. I hate to admit it, but chicken has an unusual unifying effect on the different Iranian opposition groups within Iran. For whatever reason, it doesn't have the same effect on opposition groups based outside Iran, but perhaps that's yet to come.

The West is to blame for a price of chickens in Iran.

Whoever questions that fact, has apparently a chicken brain !!!

Ha Ha Ha Ha!!
It takes less than a chicken brain to say such nonsense!

"The West is to blame for the price of chickens in Iran."

Yeah sure,just like they're responsible for the earthquake in Iran!

Anon 6.14
I think I can speak for everyone when I say that your comment enriches us all.

The sanctions are the cause of currency deflation and higher commodity prices in Iran.

Whether or not you agree on the politics of how those sanctions came about is another story.

If you remember, the Shah started building nuclear plants long before...so we can't say this is something new brought upon by the current regime.

However, I was/have been hoping the regime would at some point reconcile their issues with the west. It seems that we do better as a nation when the west is an ally and not an enemy of Iran.

In some cultures there are criers (is that right word?), who cry at funerals for money.

I would like to know, are there any agencies that employ "Ha Ha Ha Ha!!" sayers for money and how much do they pay?

Those two groups of criers and "Ha Ha..." sayers may have something common besides their desires for money.
They make believe their action for money..

I'm not sure I can answer this to your satisfaction, but I would say that based on my experience with the groups affiliated with the Islamic republic of Iran, the cryers cry because it's expected of them (the payments are just a bonus) and so they cry. Sadly, in the process of trying to cry properly, they often miss the reason why crying might be appropriate at that given situation.

An example of that is actually during ashura (google it:), where people would listen to a sermon that includes a recounting of the killing of Hussein and his followers in the heat of desert, outnumbered and thirsty. It's not hard to imagine that that would be tear jurker even for non-Shiite, but because the Islamic republic regime is all about control, it is now expected that one would always cry upon hearing that story.

The best analogy of this for a westerner is the mandatory crying in north Korea for the loss of the Devine leader. I'm sure the mourning Koreans had no doubt that they would go straight to jail if they didn't cry when the TV camers where on them.

Based on that principle, other groups in the IRI, in various capacities, feel that they have to express emotions, and opinions, in a way commiserate with the Islamic republic standards, in order to remain in the good graces of the regime.

The irony is that all of this behavior is called "Rya" in the Koran, which means "pretending" to be something you aren't, and is considered a sin, go figure!