Team Iran Having Best Showing Ever in Olympics 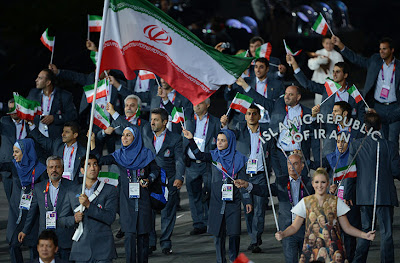 The first medal won by an Iranian in modern Olympics was a bronze in 1948 in weightlifting. The highest number of medals won until this year was seven medals in 1952 and six medals in 2004. In 2008 Beijing Games, Iran could only win two medals. Eight medals already in London, and continuing!

Those who blamed the government for the initial lack of medals, should they now praise it?

...or are we only to project our collective inadequacies on the IRI.

Well done sportsmen and sportswomen of Iran.
Despite the lack of investment by the Islamic regime who couldn't care less about sports and Iran,you have overcome all the odds and shown the true side of Iran to the world.
By your actions you have truly shown that there is hope yet for Iran in the future.

May the true god of light and wisdom be with you at all times.

None of those sportsman/woman have received any help from that regime.

If the sportsman/woman lose the regime says... Iran lost.

If the sportsman/woman win the regime says... The holy Islamic republic has won.

By no means this anti human regime needs praising.

As for your last statement,speak for yourself.

Those who blame the government and clergy for discrimination and carelesness as well as a lack of funds for the olympic and sport's issues, should remember that the nation is under aggression of different form of sanctions, sabotage and killings.
Those islamic regime's critics should also notice that most leading countries in the olympics finance their teams,in the biggest part, for propaganda purposes. So, is not it an interest of the "iranian regime" to support that kind of propaganda, or is it kind of hipocrysy from some "commentators" critisaising regime. Can they explain why Turkey has only (at this time) two medals and Iran has got 9 medals?
A-F

I see there are many smart guys among you. Can they tell me how much "regime of" Iran spent on 2012olympic prepaarations and how much Turkey and Saudi Arabia did for the same preparations?
Second question is, why Turkey has got so far only 2 medals and Iran has nine? Is it; based on your recent arguments, financial, skills' level or a political reason?
A-F

Anon 6:09 AM
Your "answer" does't not address my previous questions.

I would like to submit; for your education, the facts, that before the Olympic games President M. Ahmedinejad; with other members of government, commended Irancell as the sole and first sponsor of Iranian Olympic Team by offering Irancell a prestigious award. Around that time western government(s) considered sanctions against the Irancell....
I would have more facts, but I believe that posting of them, at this time, would be waste of my time.
A-F

No,you will be wasting my time.