Tehran Getting Ready for NAM Summit 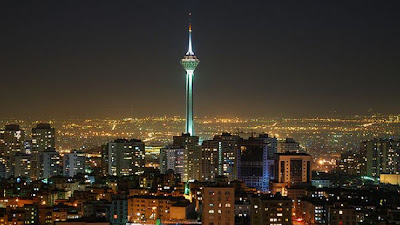 Tehran will host the Non-Aligned Movement (NAM) summit on 26-31 August. This is the 16th NAM summit. Tehran’s City Hall announced that all logistical, construction-related and security preparations for the summit have been finished ahead of schedule.

Iran’s Supreme Leader Ayatollah Ali Khamenei, in a rare appearance in an international conference along with other heads of state, will deliver a speech at the summit. Iran expects that some 42 countries represented by their heads of state or government to attend the summit. UN Secretary General Ban Ki-moon is also expected to attend. With the start of the conference, Iran will resume the rotating presidency of NAM for three years.

File Photo: Tehran at night with Milad Tower at the center. PressTV
Posted by Nader Uskowi at 1:54 AM

Those guests should cancel their visit after those shameful remarks of Khamanei and Ahmadi about Isreal; or they should go to Tehran and denounce those remarks publicly in the presence of iranian officials; they should be held responsible ....

nice looking city, i am sure the guests will enjoy the hospitality of the Iranians. Now I hope someone bring me an authentic Chello kebab.

Ahhh hans! Weren't you the one that claimed by June the rial will replace the US dollar in basket currency of the world,lol!?

They should cancel this farce and concentrate on the earthquake victims in Azarbaijan.
Shameless regime.

Now thats why we see alot of barking from israel side.
its just try to put fear in some weak hearts people.
but seems they them self (Like Perez) got frighten more.

Why don't all you morons stop supporting your puppet masters in the west and see the reality of what is happening in the middle east. Iran is a peaceful country and will remain so; however, should your bullish and arrogant government(s) try to invade Iran, they will know what a big mistake they have made. You can not have oil for free anymore and you can not have full control over Iran like you have over Saudi Arabia and other arab puppet states. Iran is strong, LONG LIVE IRAN........

You obviously don't know that the terrorist occupying regime in Tehran is giving away Iran's oil to China for free in return for their support in the United Nations, as regards the nuclear enrichment program.
Morons are those people that are supposed to run the country and those that support them.