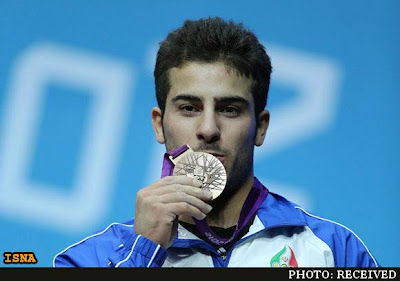 Iranian weightlifter Kianoush Rostami won the bronze today in the men’s 85 kg weight category contest. This is the first medal won by an Iranian athlete in London Olympics.

Wrestling is when Iran has a real chance to win a few medals.

I'm happy Iran won something.But it's so sad that Iran can't progress in sports because of stupid sharia law for women and also the lack of investment by this backward camel herding anti Iranian regime,so sad.
Are we any less than the Chinese?

...yes, buddy, we are less than the Chinese. They are the most populous nation on earth in case you have not noticed.

What has population got to do with it pal?
Iran a population of 75 million should have more medal winners than Britain with a population of 55 million or Denmark with 6 million.
What I've noticed is the occupying regime in Iran doesn't give a rats about anything except lining their own pockets and paying their minions to come on blogs and talk their dross for a few shekels.LOL!

LMAO! You really do believe Iran has that many talented athletes...right! You fail to understand that its not about numbers. It's about centuries old, long-time cultural traditions and norms, the way of thinking stemming from cultural behavior, and none of that has got anything to do with those that are currently running the country.

How about so called cultural behavior in China with their hundreds of years behind them?
Don't use culture as an excuse.
It's more of a regime behavior with their tazi mentality towards women and sport in general.
Iranians both men and women have shown their interest in sport but this tazi regime prevents them from achieving their goals.

It's not the regime, and there's nothing they themselves could do to change that.

It's the ingrained mentality which has prevailed in the mind of the population, rooted in old thinking patterns heavily influenced by Islam, that prevents Iran from developing 'champion material'.

Islam is the prevailing and dominant culture in Iran, if you haven't noticed. Iranian culture is forever linked to Islam.

Islamic societies have been built up in way that inhibits the development of sportsmanship and sporting skills, hence the population has been hardwired to devote their time and energy on other matters, and subsequently they lack any inclination towards the idea of developing athletic abilities.

It would not make any difference if the regime went tomorrow.

Iran's culture is not forever linked to Islam.Nothing lasts for ever and that includes Islam in Iran.In fact Islam has been shown for what it is in the eyes of the Iranian people,corrupt greedy full of lies and bloody.
Khamenei himself has said if the Islamic system is overthrown in Iran it will not rise for another 500 years.
It would make a difference if the regime went tomorrow because it was the regime that insisted the Iranian woman's football team should wear the headscarf in the Olympics and they were prevented from attending it.
It was the regime that prevented the Iranian judo player from attending because they said he might confront the Israeli player.
So it's not a cultural thing alone which can be overcome with today's generation but the prevention by the Islamic theocracy to improve ones abilities specially regarding woman and in sport generally.