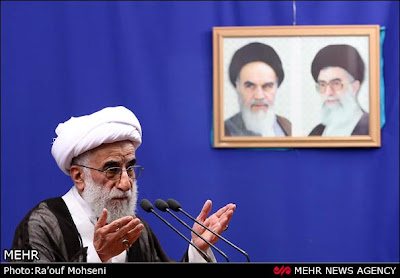 Ayatollah Ahmad Janati, chairman of the powerful Guardian Council, and today's Tehran Friday Prayer Imam said in his sermons today that the rapid rise in prices is “a transient and periodic issue.” He said the rising prices were a wartime development like in the period of Iran-Iraq war. Janati asked the public to buy less.
“If we save, a major part of the problem will be resolved. Why idly spend on a variety of fruit, sweets and syrups for parties? Who says it has to be this way?" Janati said.
"Some have unfortunately begun stockpiling food, causing shortages. This is nothing short of a sin. When sugar prices go up, you should become more frugal in the use of it," he added. (Mehr/ISNA)
Photo Credit: Ayatollah Ahmad Janati delivering sermons at Friday Prayer in Tehran. 4 August 2012. Ra’ouf Mohseni/Mehr News Agency
Posted by Nader Uskowi at 2:16 PM

Janati should talk less because every time he opens his trap he puts his smelly feet into it!

As someone who tends to disagree with religious authority (of all faiths) I have to say this was a refreshing statement. There is nothing sustainable with the current economic model of prosperity through growth, and growth driven by over consumption. Call me a hippie if you wish but we need to cut back on our consumption.

Iran should focus on resource efficiency as well as economical, social and ecological resiliency. Let it set an example for the rest of the world!

-----Iran should focus on resource efficiency as well as economical, social and ecological resiliency. Let it set an example for the rest of the world!


nice sentiments, but iran is a mess and far more likely to be made an example of by the rest of the world than to set one.

Of course Iran should focus on resource efficiency and Iran could start by getting rid of the anti Iranian regime and replacing it with a new one that cares for the country not some distant Arab lands that matter not to us.
It certainly has set an example for the rest of the world and that being never allow a religious dictatorship to take over your country.

I guess the price of these goods have no effect on Mr.Janati and the Iranian government, since the sanctions don't effect them personally. Yet Mr.Janti wants the citizens of Iran, who have and will continue to feel the sanctions, to buy less of these goods.

FATHERLY COUNSEL!!
what a fatherly heartfelt advise from a sincere Cleric!!!!.

Next we will be hearing that we should breath less to conserve oxygen.