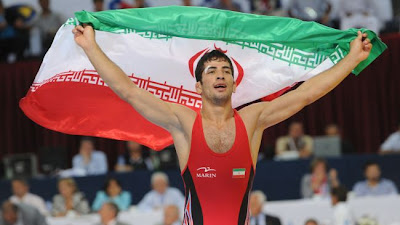 This is what Iran should be about.
More of this for Iran and less of the nonsense from the ruling clergy.

Anonymous to Anon 9:49 PM
I assume that my comment will not be censored, since the blog authors have permmitted that Anon 9:49 PM stated "...Less of the nonsense from the ruling..."

In Iran is a theocracy - it means that those who are representing policies of the state, cannot disparage those policies while serving it. I believe that if there was not enough money allocated on sport by..."clergy", may be people like that Anon 9:49 should create independent or additional funds to sponsor development of sports in Iran. Lots of peoples (like that anon) have extra money and could spent them to expand sport activities instead of empty critics. In western countries a clergy does not wet public order, but there is dollaro-cracy (lobbies and the Wall Street) which controls wetting of public life and promotion all kind of stupidities,as a form of "demokracy". When my place was burglarized, the police declined to investigate, but earlier they had time to solicit me for a donations...

In a country floating on oil and gas the clergy are the ones in power and therefore control the purse.
Their priority is their pockets and how to pull off the next job as regards Iran's wealth.
If you don't like the services of the Western police forces go back to Iran and watch public hangings in some corner street.
People like you are little hypocrites living in the West while defending mullahs crimes(stealing,raping,torturing,killing) back home.

I would do like to go to Iran and study further its culture, but sanctions would hurt me in that case for the rest of my life...
Probably not everything is perfect in current system of Iran- "thanks" in bigger part, because hypocritical western sanctions against IRI.
I would guide you to think why the West does not sanction China or... Bahrain for humans rights violation and had tolerated Vietnam's atrocities, Guantanamo and tortures against their prisoners?
I have went to the West, because I had believed the same way you do now. After a time, I have learned more and came to the above stated conclusions.
The best way for a development of Iranian nation, is a gradual way without outside interferences.
Building Iran's future on the Afghanistan, Irag, Western or Saudi Arabia's models would bring unavoidable and unnecesary perpetuation of a bloodshed to Iranian population; including a possibility for ... disintegration.
Turkey example shows, that they have not progressed to a point where they can manufacture their own submarines, jetliners etc. despite that they embraced the West and it "accepted" them ...

My friend,I served the country for a number of years.There is nothing you can tell me about my country and its present situation.
By all means go to Iran and study its culture. But at the same time be prepared for a shock because the majority of its people don't support this fascist Islamic regime.
Good luck.

Anon 4:17 PM
I responded to you because you have mixed sport with politics and disparaged political system of Iran.
I support Iran not because that I have hidden property or relatives there, but because I see a potential danger for another sensless bloodshed there. I have red that over 60% people of Iranian ancestry in the Usa oppose an attack on Iran, so I do not know in which majority you are in.
I am not able to respond to your slogans and your lack answers to my concerns. What I saw is, that simple ordinary people were waiting in lines to vote for Majlis election, Iran has lots of young educated people, women outnamber men at universities, scientists work on ambitious projects as well as that safe and clean subways operate in iranian cities. Men can wear jeans or anything they want and overwhelming majority may travel into or out of the country. Every society has atheists, drinkers, criminals, drug users or pornography lovers and those use to dislike certain systems... And of course is a group of idealists who did not live or made perfect lives themselves...

At the end, I can tell that there are many people in the world who believe they are serving their countries and they are wrong...

Because main issue of this blog should be related to Iranian achievements at Olympics I suggest you to read comments at the article titled "Team Iran Having Best Showing Ever in Olympics".
A-F