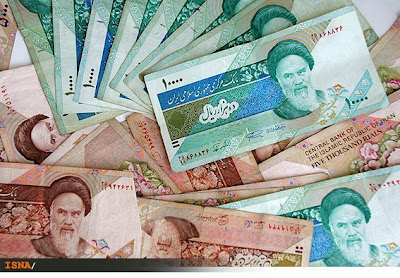 The Central Bank of Iran will officially devaluate the national currency rial, the deputy minister of commerce and industry told Mehr News Agency today. The official exchange rate is now 12,260 rials per dollar, but rial is traded in currency markets at the rate of 20,020 r/d, a whopping 63 percent differential. By devaluating the rial, the CBI seeks to close the gap between the official and the market value of rial and avoid the simultaneous existence of hugely different exchange rates.

The last time Iran devaluated its currency was on 26 January, lowering its value from 11,352 r/d to the current 12,260, an eight percent devaluation. The new official rate was not announced today, but analysts expect the devaluation to be as large as 30 percent.

What a disaster because I can remember when the dollar was 75 rials.
And Iranian currency was excepted no matter where you were.
You didn't need a visa to the USA and Japan.
Go on say Iran has got its so called independence because it hasn't.
Iran has become a third world country with a forth rate government no better than Somalia.

Disagreement with the government does not require exaggeration and ignoring the truth. Have you been in Somalia? Iran ain’t Somalia!

If managed properly this could boost Iranian exports while decreasing its imports. Now, I'm not saying the state of the economy in Iran is any good, but a devaluation does not need to be a disaster.

If only southern Europe could do the same the whole world could start prospering again.

Devaluation under normal circumstances could help the exports, but the Iranian currency has lost 71% of its value against dollar since August 2011; 71% in just one year. This is not devaluation, it's a free fall. It will shave serious inflationary effects and very harmful for the economy. (Even for the exporters who cannot forecast the exchange rate in near future, not sure when to sell.)

Mr Uskowi you're right Iran ain't Somalia yet.
But stay tuned because with these idiots in power it's heading that way.
And no I'm not ignoring the truth because the truth is what you see happening already in Iran a disaster.

You must be living in a dream world, what exports?
Every damn thing is imported from China including the toilet paper and you're talking about exports?!

This is a good thing, in the sense that those connected elites will no longer have access to ridiculously low exchange rates. Further, this should drive the black market rate down too.

the story announced that Iran is still dependent on imported steel and will be for years to come.....and you're calling it a triumph.

you're reading the type of story that used to be reported in PRAVDA and citing a source that's about as truthful.

The Steel produktion in Iran is surpassed for example po9land, which is hifgh industrialized

Basically right now Iran's entire fortune is tied to Russia and China. As long as those connections exist all these sanctions mean nothing. If those go away it's over.

Since they've been dreaming of an Iranian vassal state for centuries, Russia and China will probably turn Iran into their newest state.

Why do we choose godless countries to rule over us? Will we become godless like them?