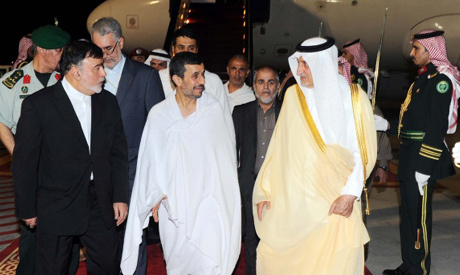 Muslim leaders from across the Middle East, including Iran's President Mahmoud Ahmadinejad, gathered today in Mecca for an urgent summit on the critical situation in Syria, hosted by Saudi Arabia's King Abdullah.

This is the regime of Allah on earth,therefor they have no interest in the earthquake stricken people of Azarbaijan.
He should be ashamed of himself and reflect on his action,because as the president he should have visited the earthquake region even if Syria was so important to them.
Khodavand will answer them in the near future.

What a sight!
It hard to tell which regime is worse, something that should give many IRI supporters pause.

First Vice president Mr.Rahimi with other members of government has visited that earthquake area and it should be sufficient....
Why must president, not a vice president make a visit; when he had earlier scheduled important visits?
What does it mean Khodovand?

And he should have visited because as an elected president of the people his people come first.

But he knows his time is up...so he is trying to get a Haj for free.

That`s just the way it is I guess.

Let me get this straight.Nothing is more important than the people of Iran,not even the situation in Syria.
The president is supposed to do his duty to the people not the other way round.
Khamenei didn't even mention earthquake and it was blacked out of news media for 24 hours.
Khodavand is the almighty god in our language.

Mr. Ahmedinejad does not look pretty in that white robe, but otherwise he is a handsome politician in comparison to others.
He use to be everywhere greeted by throngs of ordinary peoples, including children.
It should also be commendable that government officials, including his person, during official visits pay a homage to the holy sites and save some costs for the country, becase airplanes don't have to be prepared for separate flights to the holy sites...

Presidents of other countries use their jetliners for trips to play a golf..

What a load of codswallop!

This regime is only looking out for it self.

Situation in Syria is of the foremost importance for the Iranian people, because should the Western plans of interference in Syria succeed, it would mean an easier possibility of aggression against Islamic Republic of Iran. A civilian catastrophe, with increased civilian casualties everywhere; including many other countries, would follow. .

After reading some comments on this blog,I can't but notice that there are some non Iranian members that are wearing their rose tinted spectacles as regards the shenanigans of this bankrupt Islamic fascist theocracy.
My suggestion to these dear members of the blog is,stop looking at to much Press TV and RT because they are full of misleading propaganda.

I suspect somebody may have installed special malware in order to mess my texts, and look bad to others with a fluent english...

In regard to your comment, I would like to dedicate an info that a large part of the Democratic party constituency (in the US), if not a majority, also frequently uses word fascist in description to other side policies or mentality. On the other side, many, if not a majority of the Republican constituency consider liberals as a nuts or foreign agents.
So it would not be mistaken to say that majority of those people in that country use to dislike (hate?) other people...

My presence at this blog has been to learn myself and also to evaluate intelectual value of Iranian western elites... and I see that most of them are well educated including the english writing composition, but they lack a knowlege of facts from the world view perspective.
My other impression is that some people on these blogs my participate in serving other nations purposes than the Iranian ones...
I have noticed that some people use couple (unwise?) words to record their presence on these blogs. Are they really interested or they make believe and are present for something else- to "swollen" the number of bloggers or keep blog alive?

Some people may take an advantage of these blogs, and after an analysis' they may select bloggers with certain mindset to serve in actions to liberate Iran from the IRI or for other tasks...?

P.S. I use to read different point of views, including "stupid ones", when a necessity and time requires or lets to do so.

If my comments make you or other bloggers stressed (nervous), I would politely reccomend to you or others, to relax by watching a movie "(The) billion dollar brain", which was made in 60's or 70's of previous century with Michael Caine in main role. This movie depicts plans to liberate certain land from occupation in a 60 wneruhumoros way...

Anon 1:40 ---
Situation in Syria is of the foremost importance for the Iranian people, because should the Western plans of interference in Syria succeed, it would mean a smaller possibility of aggression from the Islamic Republic of Iran in Lebanon and other Arab nations.


which would be encouraging for the Iranian people.

Mr. J. Fazeli 11:09 PM
Some people already asked me about that and they had found they were wrong.

I hope you will have time to join the right side on time...

Take example from Mr. Fazeli who presently serves Iran in the aerospace field... not the foreign entities.

I see you have to be well educated since you use very sofisticated word "codswallop". Beside of that you do not present any substantiation for your (and western) propaganda, that "regime is looking out for it self".

What I have red and saw is that houses and apartaments are build for population and their accesability matches financial situation of families.
Government subsidizes commodities, young people graduate from schools and universities. The system bulds roads, subways and dams. Scientists make research and inventions...
Because to me, you are "a western minded personI", I would like to dedicate to you a statement from Joseph Stiglitz, The Nobel Prize winning economist who in an interview with the Assoc. PPress and in his book "The Price of Inequity" states "...the extreme (in inequality) that we have reached is really bad...We could have a more equal society.."
Mr. Stiglitz meant in that case western societes and the US.

Are you suggesting that the Islamic Fascist Theocracy is a Liberal Democracy?

No, I do not suggest, because in the recent decades Iranian majority has chosen; for its well being, not to embrace that model so far. It has chosen a model which serves mind of ordinary people by its religion and the proud culture.

Remember that any strategy of enemies to undermine a nation, will concentrate on its foundations, which assure unity of nation. In the case of Iran that unity is cemented by its majority religion and its ancient culture, which had tought the world about the human rights first (see The Cyrus cylinder with engraved laws). Iran doesn't need to acquire stupidities, sicknesses and deviations of the West.
Some Western countries which insist on human rights, justified tortures of captured enemies as a form of additional protection of their citizens, they also limits other citizens' rights in that context too.

Why do you think that Theocracy is worst than a "dollarocracy", where less than 1% of certain population owns more than 90%? Read also a comment from Anon 6:02AM about thoughts of Mr. Stiglitz...

Nothing this regime does abides by the Cyrus Cylinder.If you knew about the Cyrus Cylinder,then you should know that the West respects the law of the Cylinder more than the Islamic theocracy does with their Sharia law,which is a non Iranian savage law of Arabia.
As for the unity of the nation it was graphically shown last few days when the earthquake hit Iran, the government didn't act for over 24 hours and there was news media blackout.The president went to Arabia and Khamenei didn't utter a word in his usual speech.
The Iranian people are not unified with this fascist Islamic theocracy but are unified to see its downfall.

Before your wishes would come through it would take; in the luckiest case scenario, several thousand casualties if not a major world war or end in the Primakov's scenario.
Following (and against?)your previous wishes Iran would disintegrate (separate) along the ethnic lines and PG islands would go to Arabs...
Bye bye

The Iranian people are praying for the downfall of Assad and those terrorists,Hezbollah.

Sorry, but you don't speak for the majority of the Iranian people. The majority still regard Hezbollah as freedom fighters, whether you like it or not.

"Sorry,but you don't speak for the majority of the Iranian people.The majority still regards Hezbollah as freedom fighters,whether you like it or not."

So you think you represent the Iranian people?
You represent a minority clan that has held Iran hostage for over 33 years.
And your "like it or not" attitude typifies the type of uncompromising uneducated fanatic that has plagued our country for over 33 years.
People like you will ultimately learn the hard way that this regime is doomed and will end in the dustbin of history.

Anon 2:48 AM.....Wow! If I wanted a spokesman for the Iranian people,I wouldn't be coming to you,that's for sure.
I agree with Anon 6:09 PM Iranians hate the fascist theocracy and they know the downfall of Assad and Hezbollah will be a god send to the Iranian nation.
You live in your little Hezbollah world and wait for the roof to cave in.


I can tell you that the majority of Arabs don't think so.Because of Hezbollah operations against the Syrian people fighting Assad's regime.
And for sure we (Iranians)know that Hezbollah is right hand of Khamenei,and needs to be cut off.
Next we will be hearing that Pol Pot was a freedom fighter.
Give it a rest.