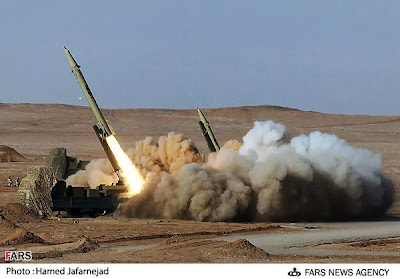 Iran unveiled upgrades to six weapons on Tuesday, including the fourth-generation Fateh-110 short-range ballistic missile. The upgraded missile has a range of about 300 km (180 miles).

While marking their Defense Industry Day, Iranian DM Ahmad Vahidi, also said (JPost), “God willing the Defense Ministry's fighter jets will be operational by the end of the year [March 20]. We are also trying to use new submarines in the next year.” Please note that he used plurals in describing these achievements. Which means that instead of “trying to use” his “new submarines in the next year,” what he is really saying is the new home-built Kilos-type submarines are currently conducting their test-runs now and will be fully operational and deployed by year-end ('God willing' is the giveaway).

How do I know that these are Kilos+ that he is talking about? If it were any other class he would have revealed it, they are not that strategic. In essence, by next year, Iran will have Kilos with the ability to launch nuclear-tipped cruise missiles in both the Atlantic and Pacific oceans, operating 24/7, ten days a week, 520 days a year. I'm confident military intelligence analysts are drawing the same conclusions today. Now, whether the politicians reveal this to the dumb masses is another thing. But these are some of the reasons no sensible leader would dare attack Iran, unless if you're the Beast.

As a matter of policy, we do not post future developments as news. Stories like Iran will make a new jet fighter or a new sub. Whenever Iran makes that fighter or the sub, we would definitely cover it as noteworthy news.

There doesn’t pass a day without an official proclaiming the future development of a new product/project both on military as well as civilian side. They are best not to be reported as hard news (although a lot of my journalist colleagues do that systematically) and await the actual or near completion of the projects to report them. But thanks for your note.

"Now whether the politicians reveal this to the dumb masses is another thing."


Please Mr Intelligence,reveal to us "dumb masses",how come there are ten days in one week and 520 days in a year?

LOL! I was about to post the same thing, but good catch anyway!

Cheers! I try to catch out the charlatans,LOL!