Not Afraid to Attack – An Israeli Perspective 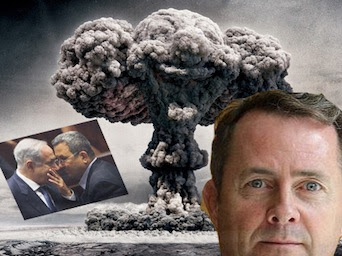 “A survey on the issue of Iran attack indicates: the public relies on Netanyahu and Barak and expects the consent of the security echelon. The majority opines: the home front is not ready and the sanctions won’t work.”

Yes! By 'mouth', the coward Zionist little mouse is not afraid to attack the brave Persia big cat but indeed, by 'heart', only the 'Al-mighty' knows well. That's the true colour of the so-called Zionist Regime of Israel.

Have you read the article itself? Your comments about the big Persian cat, etc., can be posted on any article discussing Israel, or for that matter on any subject! If you have read the article, please share with us why and where do you disagree with its content.

Nader Uskowi
I see you have tendencies to cite (and support?) israeli opinions.
There are some famous and knowlegeable Jews including but not limited to persons such as Noam Chomsky or Yevgeny Primakov who have presented opposing views.

For instance. Yevgeny Primakov - former prime minister, member of government and ambassador in USSR and Russia, has expressed recently opinion that any attack against Iran will cause only two year setback to its nuclear program and after that, Iran will develop its nuclear weapons...
A-F

Any observer of the Iranian scene should have realized by now that if there would be a military conflict over Iran, it could start by the Israelis, and at the very least would involve them directly or indirectly. In the IranEdge series here, we are publishing the articles published by Ma'arev, an important Israeli newspaper which is not available in English. I believe the English-speaking public needs to be familiar to these articles, hence our arrangement with IranEdge to republish those articles which they so ably translate from Hebrew. This series will continue on this blog.

There are so many great analysts across the globe who write about Iran nuclear program and the consequences of attack on Iran, Chomsky and Primakov included. We would have published them as well if they were in a position to spell out Israeli positions as clearly as the writers in the IranEdge series.

By the way, have you read the article on this post? What are the main differences between what this author, Mr. Shelah, is saying and the analyses by Primakov?

The brave Persia big cat is not very happy with his image taken off our old flag.

If the U.S. and its zionist master, Israel, could, why can't the sovereign state of IRAN? To IRAN, Israel is just a very tiny little state which is almost unseen on the surface of the earth, while IRAN is too great to be seen. Israel's fighter jets could simply and easily strike those iraqi and syrian(those weak, hapless and defenceless nations, militarily, of that time) suspected nuclear reactors back in 1981 and 2007 respectively, with lots of fun and within short periods of time, without any simple retaliation from those poor states. Wow! It was so scarry. As a matter of fact, Israel's biggest problem of all problems is; everytime, when it comes to striking any of those IRAN's peaceful nuclear energy facilities, it would at once come to a immediate halt. WHY? Israel has been 'beating the empty drums of war' against IRAN for more than 33 long years since the victory of the Islamic Revolution back in 1979. So, the same goes with the U.S. with its 33 long years of 'barking' of attacking IRAN. If IRAN's military power and might is not that strong or powerful enough, the world's zionists warmongers of the U.S., along with Israel, western allies and some dumb lackey middle eastern puppet leaders would had already attacked, invaded and at once taken out the whole nation of IRAN long ago but instead, they just remained as the 'dreams' for those cowards. The truth is, Israel's intelligence, its defense experts and analysts do really know and well aware that even with a single bullet drops on any of iranian soils, the consequences would be ultimately, catastrophic ones. By the way, Israel and its life term slave, the U.S., can keep on 'dreaming' for as long as they wish. What a poor dreamer of Israel!

Thanks for your reference to the issues rised in my comment.
However,I have got a doubt that that Ma'arev's information or compilations and translations by the IranEdge authors are very clear in comparison to Primakov or Chomsky's positions. These positions are available on the Internet or in their publications, but require sufficient time and technology to compile them. In my case, I am not able to match your resources and I do not possess apearent sponsors like it is in your case... -to prepare any significant research on a given couple days.
From my reading of the IranEdge, it does not give a clear picture that israeli leadership true wish is that the Usa will do the job for them and that foreign taxpeyers will finance that "adventure";like it was in the case of Iraq. Also, the IransEdge's conclusion that israeli population is not prepared (ready) yet - is quite murky.
I am personably uncomfortable to use (special) link from your website to israeli controlled one. They are masters in an infiltration or invigilations of other users (Stuxnet, Flame etc,).

If possible, I would like to know who; beside Netanjahu and Barak is on that photo attached under the "Not Afraid to Attack-..." article.

For both of You, I would recommend to study; and if possible to open a discussion, about Khazarian (Khasaria)Emporium issues, which may pertain to the legitimacy of jewishness and israeli entity.

I am also wondering, what was the earliest date, when Israel had commenced interference or an influence into the Iranian matters?

The ATOM is "unseen" doesn't mean it's any less powerful.

Let me supplement my (Anon 5:34PM)comments.
It is not too important whether israeli public relies on establishment or not. The establishment knows that it cannot achieve goals alone ,therefore they may try to invent some pretext or provocation before the american election, in a believe that Obama will be forced to support an attack, because of his political needs for the re-election.
When was the attack on Iraq, majority of the Usa population did not want that war, but despite that, reps. and senators in that "democracy",had voted for that war and against will of that majority.
When was a protest some "inventors"
created slogans "War for Oil" and "Support our troops..." in order to pacify that protest. The same, public manipulation, can be expected in israel.
Despite that it is short, my information about Primakov's statement, , has more to tell and significance than all those speculations in the recent translation of the Ma'arev's article. Primakov, who has the knowledge of the ME on the intelligence level, by his statement gives you many other clues related to the war outcome. His statement can be interpreted that regardless which side will initiate an attack against Iran, the islamic system of the IRI will survive and will be determined to develop nuclear weapon. It also signal that Russia may be not able to persuade IRI against that development and even may tolerate that fact. From those descriptions also emerges conclusion that if Iran will be able to develop those weapons, it means that it will not be destroyed to the sufficient level. Why? May be the Russia will depart from the consent on sanctions against IRI and even provide some help...

I also personally belive that (the very skilled - by the western assesment)Iranian leadership and negotiators will present temporary initiative to fend off any possible western untimely
ultimatum... and of course Syria keeps all situations in check !!
A-F