Iran Asks Turkey and Qatar for Help with Its Hostage Situation 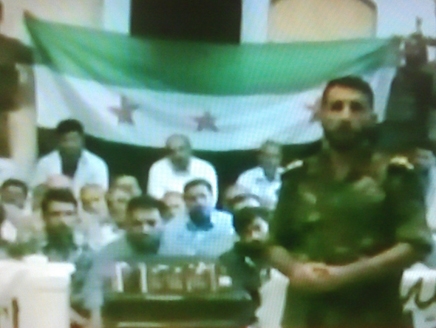 Iran has asked Turkey and Qatar to help secure the release of 48 Iranians seized in the Syrian capital by rebels. IRNA reported that Iranian Foreign Minister Ali Salehi has called his Turkish and Qatari counterparts Ahmet Davutoglu and Sheikh Hamad on Sunday.

But the rebels said today the 48 hostages were not pilgrims as reported by the Iranian and Syrian media. A spokesman for the Free Army of Syrian (FAS) said among the detainees were some IRGC officers and a number of “street tugs” sent to support the Assad regime.

Al-Arabyia TV today broadcast a video released by the Free Army of Syria (FAS) showing the hostages sitting in front of a rebel Syrian flag with a FAS officer, identified as Captain Abdel Nasser al-Shumair, commander of the al-Baraa brigade of the Free Syrian Army, present.

“Negotiations with parties inside or outside Syria are not open yet before we confirm the identity of the Iranians and prove that Iran is active on Syrian lands with its soldiers and arms,” said Captain al-Shumair.

UPDATE: the Iranian government has denied claims by the Free Army of Syria (FAS) that some of the hostages are IRGC officers. FAS also announced that they have confiscated IRGC-issued documents and maps from some of the hostages that show they were on a reconnaissance mission in Damascus.

Photo Credit: From an Al-Arabyia video released by the Free Army of Syrian reportedly showing Iranian hostages in their captivity. FAS Captain al-Shumair is standing. 5 August 2012
Posted by Nader Uskowi at 9:39 AM

how many of the abducted people were women and children? Was it was entirely a load of men from Iran entering into a war zone in which the Iranian government is allied with one of the warring parties?

This god damn regime always puts us in an awkward situation.