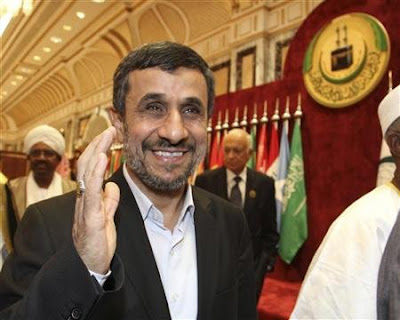 A day after Iran’s Supreme Leader Ayatollah Ali Khamenei declared that the ‘fake and bogus’ state of Israel will disappear, the country’s president, Mahmoud Ahmadinejad, told a rally in Tehran commemorating the Quds (Jerusalem) Day that there was no place for Israel in a future Middle East.

“You want a new Middle East? We do too, but in the new Middle East ... there will be no trace of the American presence and the Zionists (Israel),” Ahmadinejad said.

Of course the U.S. is not part of the Middle East, but Israel is. How could there be no trace of it in the region? How does Ahmadinejad hope to achieve that goal? If his comments were not callous hyperbole, which they could very well be, they were one of the most threatening and dangerous comments ever made by an Iranian leader against the very existence of the state of Israel.

When Ahmadinejad had started his presidency, he made a controversial comment on wiping Israel off the map. Many supporters of the Islamic Republic at the time accused the press of mistranslating and misinterpreting the new president’s comments. They argued that they were not meant as existential threat against Israel. After seven years in presidency, he essentially makes the same comments. And there are no other ways to translate and interpret these latest comments.

Of course Israel has on too many occasions threatened to strike against Iran’s nuclear facilities, but this blogger does not recall any instance of Israel threatening the very existence of the state of Iran, presumably through a nuclear war. Using such threatening comments against Israel is uncalled for and is indicative of the hatred of the Iranian leadership toward the Jewish state; a hatred that has transcended into the state ideology.

In the very tense situation in the region these days, the hope is that the cooler heads prevail. Callous use of language could only spiral into even more dangerous situation that the leaders on both sides need to carefully avoid.

Empty rants by empty headed regime.
Go to the earthquake struck region of Iran you minion of Arabia,and hang your head down in shame.

Within three years Ahmadinejad will be living Russia, North Korea or Pakistan.

He should fit in well with those people!

These people are not normal: don't know what else to say ...

The so called international statesman was too concerned for Syria and forgot the Iranian people buried under the rubble.

Please explain to rest of us what is wrong with "those people". Equating politicians and people is not only a grave error but close to be racist. In your logic when G.W.Bush said anything stupid then all the people in US were stupid?

So far no one on this blog was courageous to answer my questions -what was the earliest date, when Israel had commenced (its) interference or an influence into the Iranian matters.

Before Mr. Ahmedinejad commenced his first term of presidency, it was the israeli newspaper or sources, which attempted to tarnish Mr. Ahmedinejad's image to the world, when they suggested that he guarded the american embassy hostages; what Mr. Ahmedinejad personally denied.

May be you should also mention about the presidential chief of staff Mr. Mashaei's comments regarding Jews to see full picture in that matters...

You can find an informed analysis here:

Why are you such a liar? Israel asks for regime change in Iran every day.

Are you afraid to post those information in details?

What Anon 12:50 PM meant by "those people" was stupid people.Which is correct.
Why have you got a problem with that?

-----
Please explain to rest of us what is wrong with "those people". Equating politicians and people is not only a grave error but close to be racist. In your logic when G.W.Bush said anything stupid then all the people in US were stupid?-------


If it were only Me Ahmadinejad making such statements then it would indeed be wrong to say "these people", but as it's not at all merely the one little donkey, but rather quite a sizable number of Iranian government officials, including the present head of government, Mr Khamenei ...and also his predecessor, Mr Khomeini.....

it becomes rather reasonable to employ a term indicative of a number of related folks, such as "these people".

No one here, I don't believe, thinks that ever horror from the mouths of the Iranian theocrats is something with which all Iranians concur.


PS---if a number of people in the BUsh administration indicated that Bush was saying things with which they agreed when he spoke some stupidity or other then "these people" would also apply.

Do the people of Iran really enjoy this stuff???

Words do have meaning!

Is Mr. Uskowi unaware of the dynamics of Iranian political rhetoric?

A leader’s role is to help calm down an already dangerous situation, and not trying to prove that Iran is an existential threat to the state of Israel. At times, Ahmadinejad looks to act as a provocateur giving Israelis justification they need to show the public why they should fear of the Islamic Republic.

I’ve been arguing hard, on this very blog too, that this is the time for compromise not provocation.

The Islamic regime needs a war, because they are unpopular among the Iranian nation.
They know this,so the fascist regime prays for an attack.