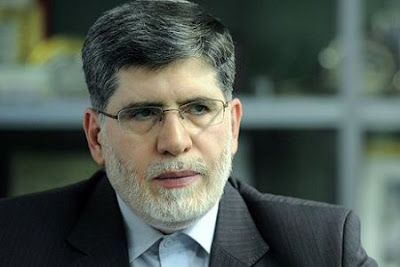 The Iranian judiciary has sentenced Ali Akbar Javanfekr, the managing director of the country’s official news agency IRNA and the media advisor to President Ahmadinejad, to one-year in jail for allegedly insulting Ayatollah Khamenei, the country’s supreme leader. The Judiciary did not reveal the content of the alleged insult. [Mashregh News, 15 January].

Javanfekr is among a number of senior aides to Ahmadinejad targeted by hardliners and collectively labeled as “deviationists.” Convicting and imprisoning the chief of the country’s official news agency, as strange as it is, could be yet another move by the hardliners to silence any opposing voice on the eve of parliamentary elections scheduled for 2 March.

If that was an ordinary citizen that insulted that Tar zaneh Haramzadeh they would be put to death for sure.
The "director" should count himself lucky by staying in the Hilton hotel wing of Evin prison.

Couldn't put it better than that you really summed it up correctly !

I must admit there is a Hilton hotel wing in Evin prison.They use this wing for grooming so called political prisoners from within the regime then they send them abroad as "dissidents" who oppose the Velayat but not the Islamic republic.
You see some of these charlatans in the BBC Persian or VOA services they always support Mousavi or advocate slight change to the system of the Islamic regime.
These people have sold their soul to the devil which is the regime by definition and they are the pet project of Rafsanjani and the secret intelligence service and of course other unknown secret intelligence services.
You are absolutely correct but may I add that they are all Haramzadeh in that regime.

you guys, fart and applaud yourselves.
Redicolus.

The only fart is the ridiculous regime which has blown it !

"you fart and applaud yourselves.
Redicolus."

Yeah you and the regime that you support should know the meaning of that sentence because all that regime does is fart on the world stage and show how ridiculous they are with their clowning antics and their street corner gutter language then they boast on state TV that they are more powerful than the US or that the US won't be able to defend themselves against the "mighty Islamic republic". Pathetic!