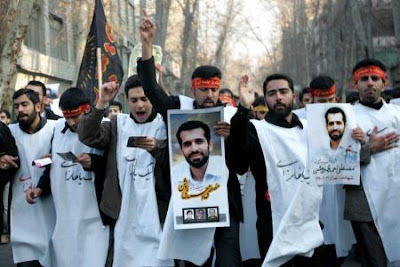 A large group of Iranian students marched in the streets of Tehran today to condemn recent assassination of the country’s nuclear scientist Mostafa Ahmadi Roshan.

The students held a rally at Amirkabir University of Technology in central Tehran, chanting “Death of America” and “Death to Israel,” then marched towards the supreme leader’s beit (office/home complex) to express condolences. They did not march toward the British and other European embassies, as they had said earlier that they would, apparently after the government refused permission fearing the repeat of an attack on a foreign embassy.

Tehran has condemned Israel’s Mossad as well as the CIA and the MI6 for the assassination of the nuclear scientist.

One day we'll have an objective definition of "terrorism" that applies to Muslims and non-Muslims.

The regime kills the scientist then the regime holds a rally.
The regime NEEDS martyrs because without blood the regime will die.
This is the situation that is in Iran.

Remember Neda and thousands of Iranians that the regime has murdered including the scientist.

Revenge is not far off..Whoever opened this can of worms will live to regret it.No place will be safe for the Zionists.

We've already seen the Zionists running scared and paranoid by giving false alarms about terror threats in Thailand trying to make the world believe they're the "victims".The world's seen through their BS and it's not working anymore. Sow the wind, reap the whirlwind.

In Azerbayjan, there are enough cockroaches (Israeli agents)running around that are begging to be stepped on.

If I were an Iranian I would not hes
itate.

There are to many non Iranian bloggers on this site who show their hatred towards the Jews or the so called Zionists and want Iran to start a war against the world so that it can satisfy their Islamic fascist and retarded tendency.
You people should get a life and mix up with diverse people and religions so that you learn what it is to be a human being.

At least two of those guys in the picture above were outside the British embassy as "students" demonstrating.They (the IRGC Basij)seem to be busy now days plenty of overtime LOL !

The only "non-Iranians" on this site and many others seem to be the usual Zionist paid hasbara bloggers and the self-exiled delusional set posting the same old worn out anti-Iran crappola since 1979.

The problem with such group think is like pissing in your pants on a cold shomali day. It may make you feel warm and fuzzy for a while but then reality bites and someone has to clean up the mess.

On a more realistic note, Iranian nuclear infrastructure has over 200,000 scientists working in over 150 sites. Iran also employs over 15,000 technicians from friendly nations, so this desperate Zionist murder of a 32 year old chemical engineer with the marketing arm of Iranian nuclear agency is hardly going to put a dent in Iran's progress.

Iran breezed through the much hyped stuxnet crap, previous terroristic murders of 3 scientists and many other sabotage attempts but Iran accelerated its nuclear program. So if anyone thinks that such cowardly acts of murdering young Iranian academics will alter anything, then you better order some more Afghani red.

The fact is that Iran graduates over 50,000 bright and very nationalistic scientists and engineers every year, so the Zionists murdering 4 patriotic Iranians is not an earth shaking event. Iran has acquired extensive nuclear and scientific expertise over the past three decades so such terror tactics by desperate Zionist thugs is a pipe-dream. Just stay tuned and see how Iran moves on. Those cowards who gloat over the death of an innocent Iranian scientist should be ashamed at their pure malice and hate. Do not worry the perpetrators of these terror acts have it coming. Iranians have a long memory and patience.

THEN IT WILL BE PAY BACK TIME !!

With interest of course. :)

There are some anti Iranian traitors who claim that Iranians who are against the barbaric theocracy in Iran are "paid Zionists hasbara".

But shouldn't they be saying that the only paid "hasbara" are the ones that are the agents of the occupying fascist theocracy in Iran.

It's truly amusing when these people come up with such claims as nuclear power development as if it took the so called revolution to create it.Not knowing that the nuclear industry in Iran was started in the 1950s and by now would have had 25 plus nuclear reactors.

It's also amusing that in 1979 that Hendizadeh canceled the program and then restarted it in the mid 1980s with third rate North Korean and Pakistani junk which is an hazard to humans and livestock.And despite over 33 years Iran has a unreliable Russian reactor which as stable as the Iranian rial.
Yes it is true we Iranians have a long memory and patience regarding the mullahs crimes against the Iranian nation.
The day will come when all the criminals who are running the Islamist fascist theocracy will be answerable to the Iranian people.