A timely thaw in US Iran relations is just what is needed to alleviate impending disaster. 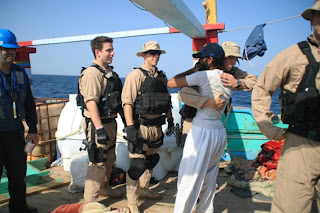 As we said goodbye to 2011 – a year of social upheaval in the west and revolution throughout the Arab world – and said hello to 2012 – which is bound to be another historically significant year – we were welcomed into the new year with a rather tense week in the Persian Gulf. Following the imposition of fresh sanctions on Tehran over its unrelenting nuclear program the regime responded with threats to close the Strait of Hormuz as well as warning the US carrier John C. Stennis not to return on its scheduled deployment there. The result they desired was fully realized, a rise in oil prices amidst widespread worries of a naval confrontation in the gulf.

During these tensions and break down of diplomacy the US Navy rescued 13 Iranian sailors in the Arabian Sea from Somali pirates. This was seen by Tehran as a humanitarian gesture and there produced a much needed thaw in what was proving to be a tense and confrontation atmosphere in the region. Such thaws are required to avert a confrontation which could ultimate lead to the escalation of a shooting war.

In 2003 following a tense year diplomacy wise between the United States and Iran following the former branding the latter as a member of its proclaimed 'Axis of Evil' we witnessed a similar thaw in tense relations. When disaster struck the Iranian city of Bam in the form of a calamitous earthquake – leaving 26,000 people were killed and 30,000 injured – the Iranian government after some hesitation accepted the United States offer of humanitarian assistance. In return for that timely gesture of humanitarian assistance Iran promised to comply with IAEA agreements.

And on the subject of earthquakes. Tehran with its congested population that numbers in excess of 12 million is in danger of being struck by an earthquake which would be an utter catastrophe as most of the cities inhabitants live in concrete houses and apartment blocks that are not reinforced. No serious measures are being taken in light of what could be an impending disaster that could leave over a million Iranians dead. And in full knowledge of this the regime just this week is opening a new uranium enrichment facility in Qom, where the uranium will be stored in underground bunkers!

We witnessed the terror inflicted on Japan by the devastating Tohoku earthquake and tsunami last year. Which followed a tense few months of fear over the leakage and spread of radiation from the damaged Fukushima nuclear plant which would have irradiated the ruins the tsunami left in its path and have been a proverbial salt rubbed on Japan's wound. Luckily for Japan and the wider region a potential disaster was averted. And the long and painful road to recovery has been made less difficult through the general civility and good will that comes from a well developed consensual society.

Lest us not forget it was little more than a year ago that Iran's capital was completely shut down due to pollution. Pollution which came as a result of low quality petroleum (in a country that has a tremendous amount of oil resources) and the governments failure to exercise basic comprehensive policies. This trivial episode shows just how incompetent the regime is with regards to domestic issues. Picture if you will how the same government will act if an earthquake where to hit the capital and most densely populated city in Iran whilst taking into account the emergency measures in place for such a tragedy. I would be of the strong volition that you would have to be a very cold individual not to feel a distinct shiver run down your spine when thinking of the suffering the citizens of Tehran would ultimately bear due to the regimes incompetence, ignorance and indifference.

The thaw I spoke warmly of earlier and the reference to the prior incident in Bam was to make the fundamental point that the International Community should make a unilateral move with regards to this issue. Which should be offering humanitarian assistance to Tehran through a network of donations, with the aim of earthquake proofing large parts of the city and also providing the emergency services there with extensive training in dealing with the widespread panic, destruction and chaos that such an incident would bring. The overall goal of such an international effort would be to safeguard as many lives as possible. Something the regime doesn't seem to be too keen on doing. Such a gesture could also substantially reduce a certain degree of animosity felt among many in Iran towards America and the wider western world. This alone would make it a worthwhile endeavour as it would open up a new channel between Iran and the wider world, change perceptions that both sides have of each other (for the better) and generally broaden their respective vistas.

Look at the alternative, the International Community could sit on its hands or turn a blind and willfully ignorant and indifferent eye. And when such a disaster does transpire we (as far as we constitute an international community) can point the our hypocritical finger of “moral superiority” at the regime, whose hardliners will more than likely blame the victims for bringing the earthquake on themselves, or – like Hugo Chavez did following the devastating Haiti quake – blame the US for orchestrating it or take a line from senior cleric Hojatoleslam Kazem Sedighi's book and blame the whole disaster on promiscuous women.

We however must remember that we saw the signs of an impending disaster, and when we had the means and know how to drastically reduce the casualties and alleviate untold suffering we nevertheless remained onlookers. And therein will lie our complete and absolute shame.

Editor’s Note: Paul Iddon is one of the authors of Uskowi on Iran. His weekly column 'Broadened Vistas' appears here on Wednesdays.
Posted by Paul Iddon at 6:00 AM

Save their sailors and kill their scientists .

Make sure nobody uses the name assassination in their reportings by the corporate media.

Some of you hobby nationalists may rejoice today. It was one of you who did it.

@ anon 7:22
The good way to go would be to cooperate with scientists in the right field... this post offers a very constructive approach to iranian-us relations, sadly it's propositions will not be followed. I personnally think nuclear energy unclean, unsafe and undesirable (I'll admit some use should be permitted for research and development purposes). Of course the U.S are worse in this regard then Iran right now, yet the fact nuclear power is used in such an unstable region(politically) should worry the whole international community, and training first-hand responders and emergency personnel would be a much better way for western powers to transmit their concerns while appearing as humane to the average Iranian.

"Some of you hobby nationalists may rejoice today."
"It was one of you who did it."


There is seriously something wrong with you.
You suffer from an innate inferiority complex added with a sense of delusional paranoia.

A political analyst says the US is the biggest violator of the self-written treaty that makes war unlawful unless attacked by another nation.

Before enumerating the most unlawful US wars in history, Carl Herman urges the American military and/or law enforcement to arrest the current American war criminals and prevent Washington from launching another war.

“The basis of law provides US military and all with Oaths to defend the US Constitution to refuse unlawful orders and act to arrest those who issue them,” Herman said.

1. The US has regularly violated treaties with Native Americans, as well as manipulating their meaning for the purpose of stealing their land.

2. In 1848, US President James Polk lied to Congress to start a war with Mexico, despite Abraham Lincoln's crystal-clear explanation as a member of Congress that the Adams-Onis Treaty placed the "border dispute" 400 miles within land forever promised to Mexico and forever promised as outside any US claim.

3. The US violated a treaty with Hawaii and stole their country in 1898.

4. The US entered in the First World War I on the basis that nothing should threatens America's national security and imprisoned the 3rd party Presidential candidates for questioning the war.

5. In the covert “Operation Ajax” the CIA overthrew the elected Iranian government led by Dr. Mohammad Mosaddegh and installed a US-friendly brutal dictator. When that dictator was overthrown and Iran refused another, the US aided Iraq to unlawfully attack Iran from 1980-1988, killing up to a million Iranians.

6. The Vietnam War occurred after the US allowed the cancellation of an election to unify the South Vietnam with North Vietnam.

7. The US reneged on promises of freedom after the Spanish American War to impose its rule on the Philippines and install US-friendly dictators in Cuba.

8. The US and NATO promoted the war in Kosovo based on short-term military and casualty reports that were later found highly inaccurate.

9. After the September 11 attacks, the US army with the help of NATO invaded Afghanistan under the pretext of combating terrorism and locating Osama Bin Laden, which is now the longest military conflict in US history.

10. The entire world now knows that all “reasons” for war with Iraq were known to be false as they were told, according to Congressional reports.

mat....And the Islamic regime is the biggest violator of human rights in Iran through torture rape and murder.So go on then and enlighten us with your nonsense.

What typical nonsense from you. Yes, let's just forget the millions of innocent civilians that the US has murdered, whose deaths are well known and have been verified. Instead let's listen to your usual ranting without any evidence about how evil Iran is, and how you hunger to destroy it by any means necessary. According to you, it would be perfectly fine to murder millions of Iranians as long as a government that is subservient to the West is installed. Thanks for illustrating you own hypocrisy and disregard for morality and logic.

Boy go and throw your dirt elsewhere because it doesn't wash here.

You better read correctly.
I said Islamic regime is evil when did I say Iran was?

The Islamic regime is the most evil regime in Iran's history and there is plenty of evidence out there just open your eyes and ears and stop spewing nonsense boy.

I don't give a damn what America done elsewhere in the world.What concerns Iranians is what is happening in Iran TODAY with the scumbag regime not Palestinians or the Arabs but Iranians in Iran.

And since when has that scumbag regime has any morality or national honor let alone logic and compassion.The dregs of society are ruling that country and that country is suffering for it and then you come here and spew your tripe.

Look who's talking one of the door mat inside the toilet the mullahs use.