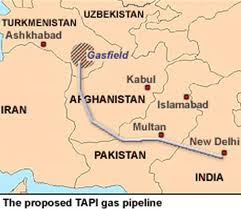 Afghan President Hamid Karzai reportedly had a successful meeting with his Turkmen counterpart on Wednesday on the status of the Turkmenistan-Afghanistan-Pakistan-India (TAPI) gas pipeline. Separately, the Indian and Pakistani officials met on the same day and are very close to an agreement on a joint strategy on transit fees to be paid to Afghanistan. The Indian oil minister told reporters that there has been “considerable progress” in putting final agreements in place.

The 1,700-kilometer (1,050 mile) TAPI pipeline will transport over 30 billion cubic meters of gas annually from Dauletabad gas fields in southeast Turkmenistan. The Asian Development Bank (ADB) has estimated the cost of TAPI construction to be over $7.5 billion.

The main remaining stumbling bloc before the construction can begin is ADB's insistence that it would finance the project only if the pipeline operation is handed to a consortium led by a credible Western multinational to help guarantee its successful operation. ADB also seeks to have the Western-led consortium to participate in the development of the gas field, an arrangement believed to be opposed by Turkmenistan.

The previously planned Iran-Pakistan-India (IPI) gas pipeline will be the obvious victim of TAPI’s construction. The Indians pulled out of the project last year and the Pakistanis are under pressure to do the same. A quick start in TAPI’s construction will also relieve pressure on Pakistan to import gas from Iran.

Anybody else find it incredible this pipeline stretches across a hotly contested country at war?

Suicidal pipeline.
Every donkey riding Taliban terrorist will hold the consortium and central Afghan government to ransom.
Without a doubt the most stupidest idea imagined.

The problem security wise would not be the Taliban. They would go along with this. Would be more difficult to secure the line inside Pakistan.

This pipeline will never see the light of day..You can take this to the bank.

The elements in the equation are too volatile and highly unpredictable.

The Paks are US stooges and will never go through with it. The only sensible and viable option is underwater pipeline to India's Gujrat state and energy hungry industrial provinces. India is buying more Iranian oil anyway and shooed the US away regarding "oil sanctions".

The Paks are salafi/wahabbi dominated Saudi slaves and supporters of anti-Iranian terrorism in Sistan and other US/Zionist destabilization efforts. They have also been regularly killing their pro-Iran Shia minority, especially doctors, lawyers and intellectuals.

Just yesterday, the Iranian border Gendarme killed 6 Pak-jundollah infiltrators near Chah-Bahar. Iran should avoid both the US occupied Af-pak and seek alternate routes.

Well, that is good news for all the iran haters, but I have read numerous reports that Pakistan is going to go ahead with the Iran Pakistan Gas Pipeline project. Iran has already finished the construction of the pipeline on their soil, and the project will be concluded in 2014. The TAPI pipeline must take much longer to finish. Also, if Pakistan bails out of the Iran-Pakistan Pipeline deal, do they not have to pay iran compensation for their investment in the construction of the pipeline on their soil? They have signed a deal after all. I think the TAPI pipeline is a ridiculous idea and it is only being discussed because of the damn US, they want to prevent the IP pipeline. It is obvious the Iran-Pakistan pipeline is the better option. To hell with the US.

Don't be so naive all the Iran haters are running Iran right now.

@ Nader Uskowi
"The problem security wise would not be the Taliban."

What!!?!! Are you crazy ? All your anti-Iran thoughts during all your treacherous years in the US has made you completely mad.

"Would be more difficult to secure the line inside Pakistan."

Also unbelievable . There will be no "suicide bomber" (I believe that they are drugged just as the suicide bomber in Domodedovo airport was)in Pakistan when the war will be over ,soon. And the Zion-US and other anti-Islam and anti-Pakistan beasts will miss them.

I think IP will be better than TAPI , as it is clear the US is forcing Turkemenistan to sell gas at a cheaper rate , while it will eat all the profits. Pakistan as a Muslim country have duties towards Turkesmenistan so that the Zion-US get the hell out of that Muslim country.

whichever is worth more?

or what did you have in mind?

Mr. Anonymous! You look pretty concerned about your Iran, but you are all going down sooner or later its just matter of time. I assure you that this project will not be an IP Pipline it will be a TAPI Pipeline for sure, and Iran would be out of the scene in this deal.