Kidnaped by Somali Pirates and Held Captive for Two Months 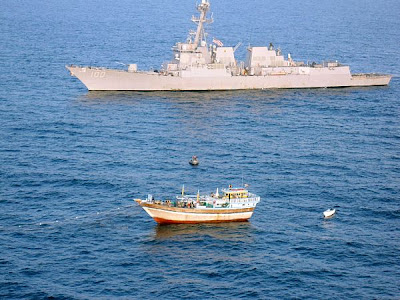 The guided-missile destroyer USS Kidd today rescued 13 Iranian fishermen who had been kidnapped by Somai pirates and held captive for nearly two months. The US Navy reported that the American forces flying off the destroyer boarded the Iranian-flagged fishing dhow Al Molai after Kidd received a distress call from the Iranian ship’s master. The rescue team also arrested 15 Somali pirated onboard.

Iran’s official news agency IRNA carried a short report on the rescue, quoting a Pentagon spokesman that 13 Iranians had been freed. IRNA has added that the Iranian military had not yet confirmed the rescue operation by US forces.

Photo: The freed Iranian ship next to USS Kid in the north Arabian Sea. 6 January 2012. Photo by U.S. Navy.

So, I guess, we should negate the idea of the USA, Trying to starve an entire nation,With cruel and brutal sanctions?. Simply because of this good will gesture.

Not an isolated incident: the USS Cape St. George rescued some Iranian Fisherman almost a year ago when their Dhow sank.

Doesn't matter what flag a ship flies the US Navy always provides aid to "for those in peril on the sea."

Can you say awkward?!

This story is BS.Where are the supposed fishermen? Just some pentagon PR for winning hearts and minds BS after talking themselves into a corner in the past few weeks..They're trying to paint themselves as the loving guys who save Iranian fishermen..

Winning the hearts and minds of Irans Foreign Ministry.

Iranian Navy would have done the same.

So lets not make too much out of this.


they're on their way home.

The mullahs hate this type of news.

No one should hat this type of news.

These so called "Iranian" fishermen were speaking Urdu , a language only spoken in Pakistan :

They aren't even Iranian nationals , they were only using an Iranian flag for their fishing ship.

You either can not read English, or did not read the whole article, or don't know anything about Iran.
The fishermen are from Chabahar in Sistan and Baluchestan in South East part of Iran and the local people there speak Urdu as well because of the proximity to Pakistani side of sistan and Baluchestan.

Anon. Jan 7th 6:47 pm
You hit the nail on the head.
Most ultranationalist/ultra religious supporters of the regime forget that Iran is more than 60% made of various ethnic groups who learn Persian in school but don't speak it a home.
These same ultra nationalists feel ashamed of saying they're Iranian when abroad, preferring to be called Persians instead.

Please give it a break for gods sake.
I'm what you call Iranian and I am proud of our history which to foreigners was known as Persia.
I personally call myself Iranian but I do know some that call themselves Persian.That's OK by me because I understand their position regarding the current situation as regards Iran's political and specially cultural retardation in the past 33 years.
Please have in mind that being a positive nationalist is a good thing because it embraces all the cultural history of Iran.
Blow it out of your mind if you think that Iran will be heading towards Federalization because that will lead to the eventual breakup of Iran as a single unified state.
But I'm not here to snipe at you but also agree with you regarding the ultra religious supporters.
Because it is they that are ruling the present situation and it is they that are leading our country to destruction and it is they the whole regime that must be disbanded.

"Thank you, sir and keep barking as always," said those fishermen.