Are there too many people in the world? - Roya Kashefi 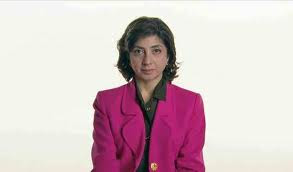 This week on 4thought TV the theme and question posed was whether or not there are too many people in the world.

One of the contributors was Iranian human rights activist Roya Kashefi whom gave a short insightful talk in which she states that the Islamic regime in Iran has purposely doubled the countries population whilst simultaneously ignoring the relevant social consequences.

She subsequently goes on to state that it is wrong to use people as merely a tool of politics and goes on to say she would like to see countries plan and ensure they possess the means to adequately provide for their populations.

To watch this short talk click here.
Posted by Paul Iddon at 2:58 PM

More ignorant nonsense that belies the FACTS. Iran has one of the lowest fertility rates and one of the best family planning programs in the world as acknowledged even by the UN (a Zionist controlled entity and no fan of Iran). Iranian current birthrate is lower than even most Nordic nations and the age cohort is also ageing, with most post Jange Tahmili "baby boom" generation now hitting middle-age.

Such ignorant statements only confirm the low caliber of Iran's enemies. Iran has a landmass of over 1.64 million kilometers and a population of barely 78-80 million. Try comparing this to India with a slightly bigger landmass with over 1.3 BILLION people. At least the author off such babble should buy and map and learn to decipher global demographics.

On a more releveant note, the world's population is indeed putting it in a very perilous state with over 7 BILLION people, mostly in Africa and Asia and this can not continue without a major socio-economic fracture and collapse.

However, "overpopulation" is not one of Iran's immediate proplem considering its rich resources.

True, Iran's birth rate increased considerably in 1970's and 80's and slowed down significantly in 1990's and early 2000's but it is also true that the current government of Ahmadinejad has been suggesting and promoting larger population and birth rates and a reversal of previous governments.

wow what she on about

simple answer to why shes wrong

she is just one of trash that playing tooles of zionest games which will be like this comming days more propeganda will be hears about it specialy USA and west put section unusual pressure from every ancle focuse for iran from business to market to broadcasting to crash country in the corner let we see how they respond would be as you know the ofcom take press tv of the air to day or iran goald and rial unbalance terrorist action but non of it would stop iran to achieve them target.

The reason why Iran has a low birth rate is because the people have realized it's no point in having children in the present circumstances due to the low caliber of Iranian leadership disregarding both industry and creation of jobs as well as providing economic stability.
As for India they are well known for eating a lot of hot curry which makes them highly active for procreation.

I'm so glad that Press TV lost its license because they were an affront to anybody with an grain of knowledge towards the realities in Iran.
But what the hell if this upsets the minority of zany trash that come on this blog and spew their zealotry then I would say it's worth it.
:-)

Paul---she's mistaken about their being used as a tool of politics because the politics are merely a tool of the religious views.


so saying that it's something "for the population" is only partially accurate.