In London, Britain's Defense Secretary Philip Hammond said his country was ready to strengthen its military presence in the Gulf if needed.

The U.S.-led convoy of warships now in the Gulf — which included Britain's HMS Argyll frigate and France's frigate La Motte Picquet [sic] — sent "a clear signal about the resolve of the international community to defend the right of free passage through international waters," Hammond told reporters.

"We also maintain mine-counter measures vessels in the Gulf, which are an important part of the overall allied presence there, and of course the U.K. has a contingent capability to reinforce that presence should at any time it be considered necessary to do so," he added...

Hammond declined to offer specific details on what forces are currently in the Gulf, but said it had about 1,500 Navy personnel in the region east of Suez, which includes the Middle East and Indian Ocean, and a Royal Air Force base in Cyprus in the eastern Mediterranean.

Four anti-mine vessels are based out of Bahrain, which is also the base for the U.S. Navy's 5th Fleet. Britain also has two frigates — including HMS Argyll — three support ships, a survey vessel and one hunter-killer nuclear submarine in the region, the ministry said.

Last year, the U.K. created a Response Force Task Group — drawn from a pool of warships and marines — that can be deployed at short notice.

In Paris, French military spokesman Col. Thierry Burkhard said the French warship, which specializes in countering submarine attacks, has since separated from the British and American vessels, but remains on a "presence mission" in the Gulf.

France doesn't have plans to deploy more forces to the zone, said Burkhard, noting that France has a small base in the United Arab Emirates, which currently houses six Rafale warplanes and about 650 troops, including an infantry battalion. 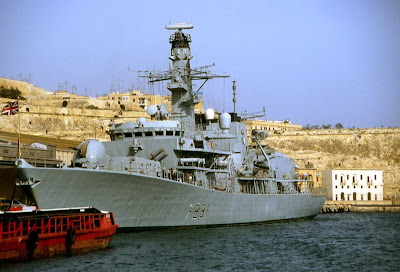 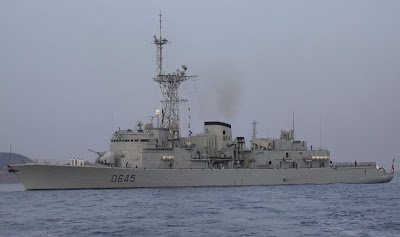 shut the hell up you dirty indebted brits. the US is the one with military and economic leverage, not your pathetic puppet country.

More tin cans waiting to be sunk...If the Taliban have been able to survive shock and awe to the point where uncle Scam is now suing for peace,I'm sure Iran will do even better.

Let them send their ships.In fact, all their ships for good measure.Iran wouldn't need to fire long range missiles so that'll be cost saving.Just a few well placed short range missiles and all these floating coffins will have the same burial Osama Bin Laden had in the bottom of the sea.

How long will people realize this is an economic war and has absolutely NOTHING to do with a nuclear Iran?

Just let the presence of even hundreds of those Zionist's bullies with its dumb lackey slaves' ugly sitting 'DUCKs' and 'DUCKLINGs', even along with its thousands of ugly 'BIRDs', both in the Persian Gulf's sovereign iranian territorial waters and skies. Welcome!

By my calculation, in the event of a miscalculation, the mighty Islamic Republic of Iran, without any hesitation and with no time to lose, would ultimately and specially treat and serve 'those with no balls' with the real great tastes of Iran's self-made champagnes and wines. What unforgetable ones!

Could one imagine a match, between a group of people(those bullies) vs merely a single person. Is that what the world called 'FAIR'?

I believe that if Russia makes a contract with all the western European countries today that it will never fire a single bullet toward them ,for sure these countries will not look for Zionist controlled US anymore in the future for their "protection" . It is disgusting for all the Christians in those countries.

Seriously folks, the Brits are just barking lapdogs of US/Zionism. Their economy is bankrupt and their pathetic military is bogged down in a war of LOSING ATTRITION against Afghan opium farmers also known as Taliban.

The Brits are delusional if they think Iran will take them seriously. Their military is barely 100,000 mercenaries ( many Gorkhas and Sikhs) and would not last a week in a full scale convention war against Iran (barring nukes and US support).

The poor Brits are still so pompously delusional but good for a laugh. The poor quality of British soldiers is on ample display in Afghanistan as they are booted out of most of Helmand and the US had to save their bacon from Taliban.

Brits are just lapdogs barking like their Zionist clones. The only nation that can tangle with Iran is the US and even that is not really looking for a fight as it would go global in a few weeks and the Persian Gulf oil infrastructure would be history, bring on a global economic collapse.

Iran may not be a "superpower" but it is no pushover eiether. The Brits need to focus on their pensioners eating dog food and students facing educational cuts that strut their idiotic arrogance. The Queen is parasitic enough, let alone initiate an war with Iran which is much larger that the puny British poodles can handle.

What ever you morons think the British navy still can cause a lot of damage.You people are childish and have no idea of war.Just a bunch of ignorant hate filled Islamist rednecks with ill founded delusions of grandeur.

But the loses tolerance of USA-OTAN is very low.

As an example, Frenchs are considering a retreat from Afganistan, only for the death of 3 TROOPS!!!

Iran will not be able to defend os sucha powerfull navy but Iran can very easyly sunk 4 or 5 BIG SHIPS:

And this is unaffordable for the public opinion back in USA.

The colonialistic Brits, along with their partner in crime the French, are in for a surprise. Particurarly the Brits will come to realize that nothing has changed since the Falklands war in 1982 (fancy counter missile stuff wont provide any garantuees because current anti-ship missiles are leaps ahead in superiority) - they will take a similar beating like the one served by the Argentine Air Force during the Falklands war. As a matter of fact, Iran's retaliatory capabilites far exceeds that of Argentina, which despite its limited reach to the British fleet and lack of sophisticated weaponry, would have devastated the entire British fleet to the point of defeat, had their simple Iron bombs exploded upon impact (in several instances they just went right through, making a small hole through the hull).

You people are crazy!
The British and the CIA installed this Bimar-e Ravani Islamic regime.
They are playing a game can't you see you halfwits.
If the West wanted to they could've easily got rid of the sock puppet Islamic crazies long time ago.
But this way it benefits the West to start a war so that Iran can be broken up.The mullahs always provoke greater powers so that Iran is destroyed just like the times in the Qajar period against the British and Russians.Iran lost a lot of territory.
This dirty regime is put there to ruin Iran and they have succeeded.
If nobody can see that either they are stupid or are stooges of the traitor mullahs.

You people are crazy!
The British and the CIA installed this Bimar-e Ravani Islamic regime.
They are playing a game can't you see you halfwits.
If the West wanted to they could've easily got rid of the sock puppet Islamic crazies long time ago.
But this way it benefits the West to start a war so that Iran can be broken up.The mullahs always provoke greater powers so that Iran is destroyed just like the times in the Qajar period against the British and Russians.Iran lost a lot of territory.
This dirty regime is put there to ruin Iran and they have succeeded.
If nobody can see that either they are stupid or are stooges of the traitor mullahs.

What else have you got? That the moon is also made of green cheese?

mat, you've a very foolish tendency to describe everybody opposed to the Iranian theocratic regime as "Zionists".

It's not particularly truthful and it leads to the assumption that you're simply some kind of bigoted little person thinking that the world is being run by Jewish people and afraid to directly say as much.

It might be pleasant if you could express yourself in a manner that would avoid arousing the idea that you're merely an ignorant and bigoted person.

thank you, mat.... superpowers, as you humorously describe Iran, don't need advocates who sound so entirely without honor.

Actually "mat" has been spot-on. The British are intriguing pip-squeaks who just jump on US/Zionist commands.

For the grown-up here, the simple military calculus for dummies can even show that UK is a small island with very little power projection capability on its own in the Persian Gulf (basically an Iranian inland lake). The Brits, even when they had an antiquated aircraft carrier against the very brave, but under-equipped Argentines in the Malvinas almost lost the war if the US and NATO had not come to UK's assistance.

The Argentine Airforce with barely 60 combat capable Mirages, A-4 and prop driven Pucaras inflicted crippling losses on the Brits, the Fuerza Aérea Argentina was operating at limit of its aircraft endurance from its nearest bases. The Argies has only 5 EXOCETS and scored 100% hits.

Iran is a GIANT compared to Argentina and will be fighting on home turf with thousands of missiles, a robust airforce and plethora of SSM and shore based artillery. The tiny British navy would last a day in the narrow and shallow confines of the Persian Gulf. It was not that long time ago that more than a dozen Brits from their navy were captured by the Sepah and had their heads shaved. Iran even gave these guests new clothes and Gaaz. The same or worse fate awaits any other British puppet adventurism. Iran will decide the future of the puny "royal navy" if the shooting ever starts. A conflict initiated by gutless Brits is highly unlikely and the outcome is certain.

Its the fault of those runaway Royalists of the 1978.

In order to justify their runing, they brought their kids up with untrue eccentric / fantastic stories of how pleasant it was in Iran and how it all changed for the worse.

These second/ third generation virtual wariors are now here and get on other peoples nerves with insults and nonsence.

Iran is what its people decided it to be and it shall only change when its people decide its time and no arse with Pahlavi or MKO or other tendencies can or shall even for a second change this fact.

Now go and really get a life.

No unlike you and your ignorant kind we don't see the face of charlatan Khomeini on the moon.
The mullahs are British puppets and Iran has become a colony of China.

The title of "Sir" is given by Royalty and since you live in Britain is it because you were given that title for being a good stooge of the British for services rendered against Iran?
I always knew mullahs and mullah boys were the servants of Britain and Russia.Also add to that list your new colonial masters China.

One more thing the good name of Dariush is being sullied by you.
Why don't you use a Muslim name recommended by your mullahs?