US Navy Rescues Iranians in Distress at Sea

Rescue Is the Third This Month 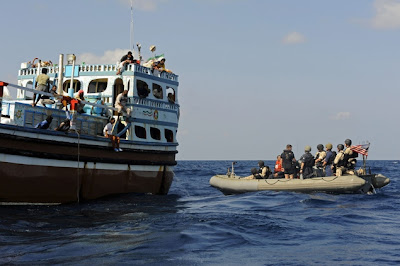 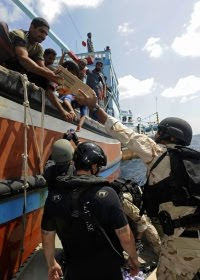 I don't trust this Tom foolery by the Islamic republic.There is something fishy going on and I see a surprise coming from the corner against the US crews on one of their ships.

Remind me never to sail on a Dhow.

How often do these things sink? anyone got statics?

I think the IRGCN needs stop chasing US warships on patrol and conduct more safety inspections on their own merchant fleet.

such ridiculous games the US navy has to play, because AIPAC put them into a difficult spot.

They still kill and assassinate the very brother of these saved people.

Wow! I see some haters here.
Why don't you people go and fight in Palestine.

Who is a hater? Why don't you get hired by the CIA and go to Iran for espionage? Show your love.

how crazy are you all when you have to bicker about people being rescued from peril of drowning?


If someone in Iran's foreign ministry can express simple gratitude to the USN for the rescue two weeks back, why can't the folks here manage as much?

~~~~"We consider the actions of the US forces in saving the lives of the Iranian seamen to be a humanitarian and positive act and we welcome such behaviour," foreign ministry spokesman Ramin Mehmanparast told Iran's Arabic-language broadcaster Al-Alam on Saturday.~~~~~~~~~

Anyone would have rescued them, but that still does not nullify the Americans from the act terrorism and assassination on the Iranian nation.

May those responsible and those rejoicing get uncurable cancer and suffer till they die.

From the bottom of my heart, AMEN !

and of course the same fate should be wished on all those from the Iranian govt who are responsible for acts of assassination and terrorism, from Khamenei on down.

I wish no Iranian harm unlike you.
That exactly is the diffrerence betwen people like you and the rest.

Thanks for rescue them.

Pls rescue all other Iranian too, AND LEAVE THEM ALONE!!!

The rescues are staged.

The US causes distress and then rushes to their help.

Last attempt went wrong and so many died.

US/Israel and UK are no friends of Iran .... They are after war and the destruction of Iran.