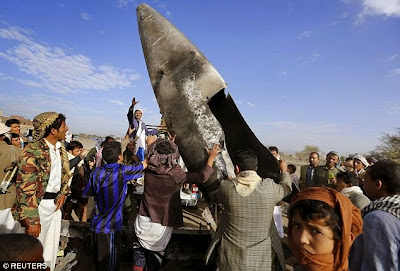 The Huthis said today they have shot down a Saudi F-16 fighter jet during a fresh wave of airstrikes. (If the aircraft that went down was indeed an F-16, then it must belong to a member of Saudi-led coalition, as the Saudi Air Force does not operate F-16s.) There were pictures of people celebrating with the wreckage of the downed aircraft in north Sanaa. The jet reportedly was conducting airstrikes against al-Dailami air force base when it came down.

The Saudi-led coalition has stepped up airstrikes on Huthi positions and military bases and weapons storage facilities under their control since a humanitarian ceasefire ended last Tuesday.

Meanwhile, in Aden clashes rages in the north, east and west of the port city between the Huthis and fighters loyal to exiled president Hadi. The United Nations plans to hold a conference on Yemen in Geneva next week.

does Saudi Arabia really operate F-16??? If anything they are drop tanks from a damaged F-15. Anything else its from a different country

Royal Saoudia Air Force don't have F-16 on inventory,EAU,Morocco and Egyptian (I don't sure,they take active part of bombarding of Yemenia) have;if the Huthis shoot down it,it's interesting to know,with what,canon or missile(Misagh ,Sa-7;or SA-6,SA-2 or SA-9);shoot down a modern plane like Falcon with conter measure modern is very difficult,you need have detection's radar,training,spares,I don't think the Huthis can do that,so the failure mechanical can be the right answer

True, RSAF does not operate F-16s. The news agencies, quoting Huthi officials, say it was a Saudi F-16. If they actually shot down a Saudi jet, it must be an F-15; or probably an F-16 belonging to other members of the Saudi-led coalition. Thanks for your note.

So far evidence only of external stores such as missiles, drop tanks and pylons- possibly an emergency stores jettison and not a shootdown. Have to wait and see if more evidence comes to light.

I'm not sure Ansarullah should be characterized as "insurgents." They were successfully engaged in the political process in the capital city. According to the outgoing UN envoy, a political settlement was close at hand. And then the foreign intervention took effect, and the resigned, former president fleeing the country. Also, perhaps most importantly, the Yemeni Air Force and the majority of the Yemeni Army sided with Ansarullah. With so much support from state institutions, seems odd to characterize them as "insurgents."

Ansarullah did not "engage" in political process. They sent their fighters to Sanaa and occupied the city and put the sitting president and other senior leaders under house arrest. Probably this process was a coup.

I am not certain why Hadi resigned while he was under the control of the Huthis. I would just imagine that when you have guns pointing at you, you might even sign a resignation letter. Fleeing, he did. But he also had the choice of staying in the country and get arrested and killed by the Huthis.

The Huthis should have participated in political and electoral process. They could have well won the next election. The Iranians must have warned them against occupying Sanaa, and then again against moving toward Aden. But if you are an ideologically committed armed group, I guess you do those kinds of things.

The parties could still agree to negotiate in good faith and find a truly national solution to this impoverished country. Sooner the better.

Mr Uskowi given your above statements, it makes me wonder why the forces loyal to the former president Saleh has given the Huthis such solid support. Given so much of their strategic assets are being lost when an election victory seemed possible? Or was the Die cast for them?

Given the reports regarding Yemeni Mig 29's being flown to Iran at the beginning of this crises, it would seem strange that the window of opportunity was not utilized to furnish Saleh loyalist or Huthi's with some sought of air defence by Iran? Is there any reports of this happening? What information is available regarding Huthi and Saleh loyalist air defence abilities?

Hadi was an unpopular president with not much of independent support base. I just imagine that the AnarAllah and Saleh thought the putsch into Sanaa will end his reign and they could take control of the government. What apparently they did not expect was the reaction by the new Saudi King Salman and his ability to gather support from other GCC countries to counter the Huthis/Saleh forces. I believe that was a miscalculation on Saleh's part. And you're correct, they have lost so much strategic assets to the airstrikes, and worse having the country in ruins. AnsarAllah needed to have more patience, like the Hezbollah in Lebanon.

Iranians have helped Houthis to do that, and two unexploded american missiles were recovered by the Houthis and will be transfered to their sponsors for an reward.