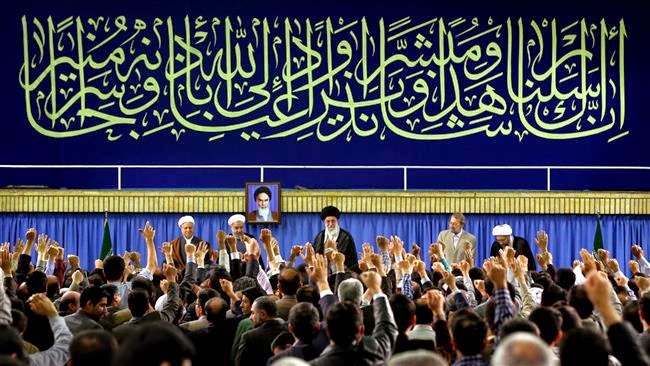 Khamenei also said that the “wicked policies of hegemonic powers in the region are aimed at waging proxy wars.” He had choice words for Saudi Arabia and its role in Yemen. “Those who kill the Yemeni people are worse than infidels.”


Comment: Khamenei’s choice of words and phrases describing the U.S. was interesting: Supporting terrorism, waging proxy wars and desire for hegemony in the region. Phrases increasingly used referring to the Islamic Republic’s behavior in the region; as though Khamenei wanted to throw them back to the Americans.

His use of the word “infidel” to describe the Saudi leaders was probably the harshest attack he has yet launched against the Kingdom. It was risky too: If Saudis are waging a war in Yemen to keep their preferred regime in power, so are the Iranians doing the same in Syria, for more than four years! These are tense times in the region, seen in the anger expressed so openly by the leaders.

Photo credit: Khamenei with Iranian officials gathering to congratulate him on the Eid Mabas; Tehran, 16 May 2015 (IRNA/Press TV)

lol! Worse than infidels? Ali Khamenei has become quite a takfiri himself hehe!