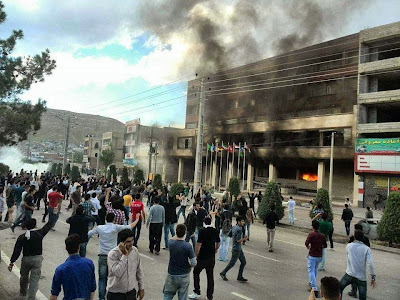 On Monday, Farinaz Khosravani, a 25-year old chambermaid at Tara Hotel in Mahabad, the historic and cultural center of the Iranian Kurdistan, lost her life after jumping from the fourth floor of the hotel, allegedly to avoid sexual advances by a senior member of Mahabad branch of the ministry of information, Iran's intelligence service. The police, however, announced on Saturday the arrest of a suspect in Farinaz's death, saying the suspect had no connection to the intelligence or security forces.

Reports on Twitter and other social media indicate that tensions are still high in Mahabad. On Thursday, the police used tear gas to disperse hundreds of protesters from the area in front of the hotel, and moments later some of the protesters torched the hotel. Thousands of people later marched on the streets of Mahabad after a call from women's rights activists to protest Farinaz's death.

Now the police hope today’s announcement of the arrest of the suspect would return calm to the city. Some reports on the Twitter today indicate that the public might not accept the police explanation.

UPDATE: Rudaw reports that security forces have withdrawn from the area around the hotel to avoid further inflaming public anger. An official inside Mahabad mayor's office told Rudaw that "protecting people's lives was more important than the hotel." (Rudaw, 9 May) 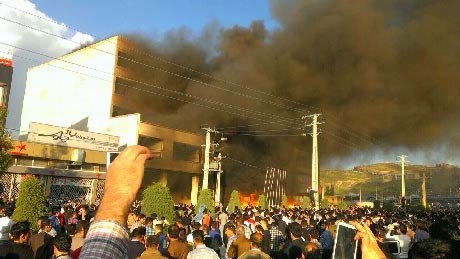 why the stupid people burn a Hotel , which has nothing to do with authrities in Iran ?
how many people lost their job in Hotel ?
why they donot go and burn a police station ?

Thank you for posting this news. This is graphic evidence that the regime has lost what ever little popularity it had before. With teachers demonstrating throughout Iran and workers laying under the wheels of officials limousines in protest of their wages not being paid in months.The regime better get used to this because all the signs are there that Iran is about to erupt into a volcano of discontent and mass civil disobedience which could eventually lead to the demise of this disastrious experiment of ours. As the saying goes,"you can fool some of the people some of the time" but "you can't fool all the people all the time." My condolence to Farinaz's family for their beautiful daughters loss. And may her loss not be in vain.

While I strongly agree that authorities in Iran need to address many social problems, like lunatics in the security force misusing their powers for personal ends, I find it ironic that the opposition never misses an opportunity to anticipate an "impending Iranian spring" every time people in one of Iran's cities take the streets!

How many times have they made the same anticipation just last year? I lost count!

Grow up people, these things happen in Iran every 2 years, doesn't mean Khamenei is about to pack up and leave!

Anon 4:53 PM.......Maybe if one of the regime's security services in collusion with hotel management didn't attempt to forcefully rape a female hotel worker the people would not have torched the hotel down,would they? Please read the the story behind why the hotel was burned down and then you will understand the reason why they didn't burn down a police station. But they will come to that as well.

I think that the criminal has now been shown to be a local man, not a member of the security forces

Piruz Mollahzadeh,the facts are that the Iranian people have had thirty six long years to "grow up" to see what sort of creatures they are up against. The "lunatics" as you rightly claim are not only in the security services but also the upper echelons of the regime leading right up to the very top. Therefore such characters are the main reasons behind the "social problems" of the country. Such people can't even address themselves.You expect them to address the social problems of the entire nation?