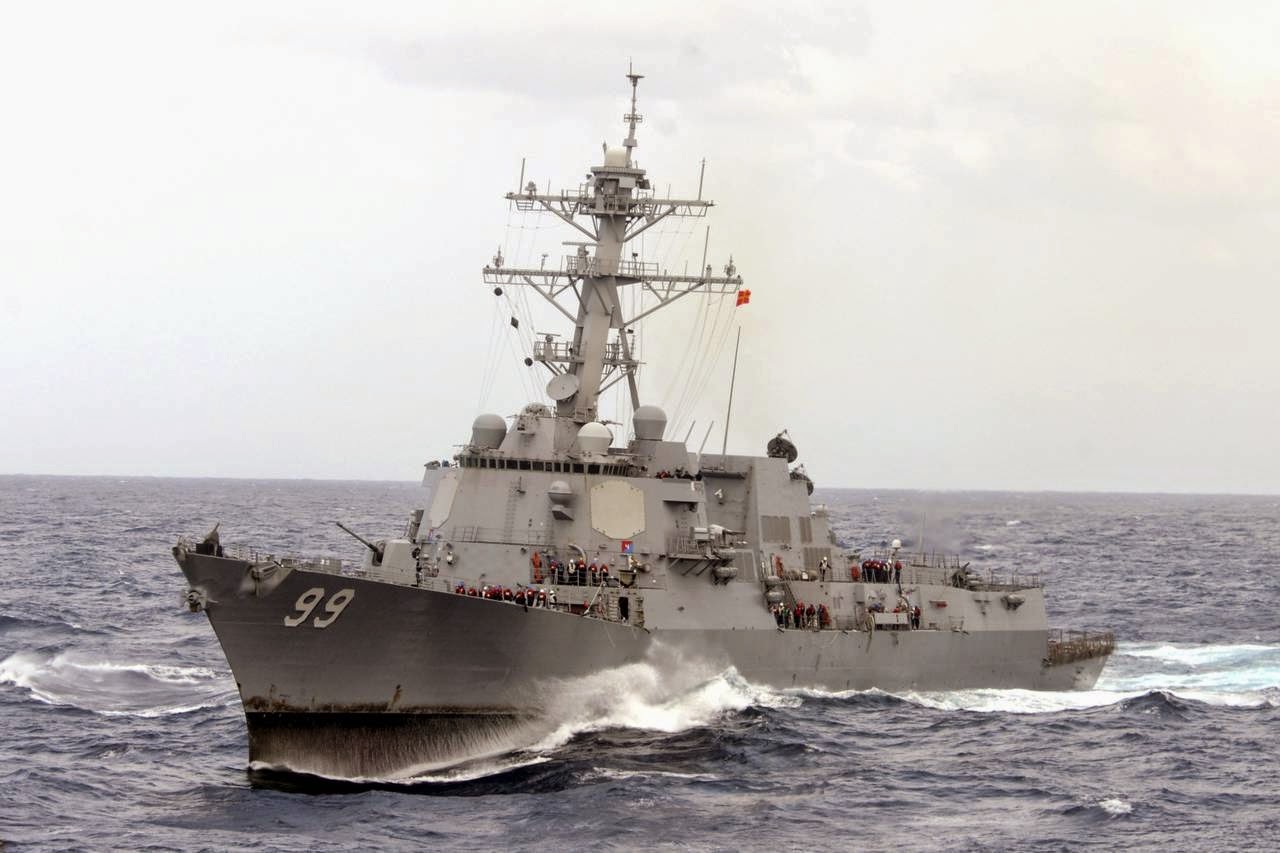 U.S. Navy on Thursday accompanied four American ships and a British vessel moving through the Strait of Hormuz, the Pentagon announced. Officials said U.S. will offer the aid to any other nation concerned about interference from Iranian navy. The policy was adopted after IRGC Navy seized a Marshall Islands-flagged cargo ship earlier this week at the Strait of Hormuz. (AP, 1 May)

The self inflicted clowns in Tehran have just given another excuse for foreign involvement in the Persian gulf. Sometimes I wonder whose side these Akhoonds are on.

at every corner, in cost line every island , at every speed boot are Anti ships missile available target at enemy. the US Navy knows it exakt und is want to prevent any clash.
they are in passiv position.

so by the way, the the US involmrent in Persian gulf does not need any excuse, as thier Involment in all other part of the World

as always, the Akhounds behave in a way they deem fit in their own interest. Not in Iran's interest, not in the West's interest. Just their very own and only it, without caring even a bit about lasting consequences for the country and both its present or future, it's sadly no news for anyone in today's world...

Still, I agree with Anon 5:26 with the fact that the coastlines along the Persian Gulf and the Straight of Hormuz today are one of the world's biggest concentration of anti-ship weaponry in contemporary times. The IRI's military brass indeed has learned a great deal since the disastrous consequences and humiliation they endured after Operation Praying Mantis and put a special emphasis in solid development work on those kind of weapons by the local industries, with obvious and documented help from the Chinese and Russians. The US or any other actor would be ill-advised to act without considering every of their moves in such potentially hostile sector with narrow room for maneuver. Same for the Iranians who would be foolish if not crazy taking the first shot against any combat ships in the area.

Anon 4:46 PM......Yes I know there are anti-ship missiles spread all over the persian gulf coast. But you people tend to forget the sky over Iran. The US navy will have total control over the sky and space over Iran rendering all those missiles useless in any serious combat situation. Anon 5:26 AM knows if the Islamic regime is dumb enough to attack the US navy and sink one of their ships let alone an aircraft carrier,it will be WW3 and the end of Islamic regime.

agreed, and as I said in my earlier post, Iran would be crazy drawing first blood in any given context within the Persian Gulf despite its many tactical advantages. But you people in turn, if I may, also tend to forget about Iran's ballistic arsenal as well. In the kind of absolute, total war scenario you're referring to, the USN would indeed draw all its air-power and cruise missile force for sure, but would also be faced with the prospect of losses of a magnitude not seen since the end of WWII, let alone Gulf air-bases and maritime infrastructure pertaining to the 5th fleet. Why ? because if we're talking about unrestrained, massive air power on the US side, then we are contemplating massive ballistic power on the Iranian side that the US has not immediate solutions for either, by its own regular admission through public Pentagon session since 2011.

Coastal anti-ship missiles are indeed not the sole asset to take into account if we're talking about the full range of weapons at the IRGC's disposal and clearance to use it in its entirety within the context of such a nightmarish full confrontation. Then, for every major asset there is a counter-asset in Iranian hands : air power and cruise missiles have to get close by through carriers and battle groups that can get threatened by Anti-ship networks, airbases and specially their runways can be damaged and their operations halted or greatly degraded for extended periods of time via ballistic strikes and so on. And you cannot discount Iran's acknowledged capacity at establishing a decent CI3 network of anti-air defenses entirely, even without the S-300. As some other member as pointed out, morale in case of symbolic losses is a factor, and the US is not used to lose its birds since the end of the Vietnam War.

Still, of course, Iran is definitely weaker and its aforementioned systems prone to failure on the mid-long run in case of attrition war obviously, I cannot imagine a country with the military budget and size of Iran be able to provide a decisive military answer to a superpower such as the US. But projected losses are big and inevitable enough for Washington to refrain from audacious unilateral actions as much as Iran in those tiny waters where their military might is offset by geography and Iran's has thousands of kilometers of coast to hide their assets, that the US military would take weeks if not months to take out one by one.

Remember the Great Scud Hunt against Saddam's Iraq in 1991 ? there were much fewer and more visible, bigger targets, much fewer prowess at camouflaging and decoys by the Iraqi, flat terrain topography, still the operation didn't take out more than a dozen Scud launchers out of the low hundreds that Iraq had in the whole conflict before its forces capitulated over Kuwait. Iran is an even bigger nightmare with no compare to what this was, to quote only that. Panetta made it clear in his repeated assessment of the Iranian threat in the area.

We are fortunately eons away from such a direct and total conflagration between Iran and the US, a fact reinforced by the reluctance of both countries at going against each other in a region where they need each other, would they hate it or like it.