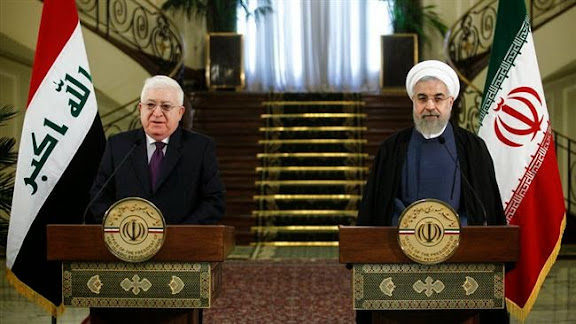 
Presidents of Iran and Iraq in a joint statement here on Thursday asked for ending Saudi-led military attacks in Yemen and that no third country is allowed to interfere in the friendly ties of the two neighboring countries.

Iran-Iraq relations are referred to 'strategic and serving both friendly countries' vital interests' in the two presidents' joint statement.

On prevailing regional political and security crises, the two presidents have stressed their joint viewpoints and mutual comprehension of the discussed issues and reiterated the need for continuous bilateral and multilateral consultations aimed at passing through the existing security challenges and strengthening of the regional ties.

Dr. Rouhani and President Masum meanwhile considered terrorism and extremism as the greatest challenges with which both the region and the world are entangled.

They condemned using terrorism and extremism are tools aimed at materializing political objectives, stressing the necessity of responsible cooperation among all regional and international players in campaign against all types of terrorism.

The two sides were agreed that comprehensive regional cooperation is needed to seek political and peaceful solutions for the regional crises free from military and political interventions in internal affairs of the regional countries.

The Iranian and Iraqi president have voiced deep worry about the ongoing developments in Yemen, stressing the need for ceasefire, ending the siege and rapid forwarding of humanitarian aids to that country and immediate beginning of national dialogue aimed at establishment of a new government based on Yemeni people's will.

President Rouhani and President Masum were agreed that continuation of crisis in Syria and attacks made by terrorist groups there posed a great threat against regional peace and stability.

“The international society must responsibly react to the developments in that country and encourage the whole national forces there to hold dialogue and achieve a Syrian-Syrian political strategy out of the prevailing and lingering crisis there,' they emphasized.

The American perspective views Iran’s participation in the Syrian conflict as hypocritical insomuch as Iran expresses condemnation for the Saudi-led armed intervention in Yemen. However from the Iranian and Iraqi perspectives, the Saudi-led intervention has taken place after Yemeni President Hadi resigned and in their view, became a “fugitive" upon taking refuge in Saudi Arabia” Moreover, in the Syrian case, they contend, President Assad has remained in Syria and has gone on to be reelected in a wartime, multi-candidate election, with foreign observers on hand that included delegations from more than 30 countries including Bolivia, Brazil, Cuba, Ecuador, India, Iran, Iraq, Nicaragua, Russia, South Africa and Venezuela. At present, none of this changes the fact that the United Nations continues to recognize Bashar Assad as president of Syria and Abd Rabbuh Mansur Hadi as president of Yemen. Changes, if there are to be such, seem destined to the dictates of war.
Posted by Mark Pyruz at 2:27 AM

as if there's a singly bit of substance to small bit of hot air.

and, as is often the case, that the silly fool who wrote " President Assad has remained in Syria and has gone on to be reelected in a wartime, multi-candidate election..."
entirely ignores that the reality is that there was no real election.
that was entirely a pitiable bit of toadying.