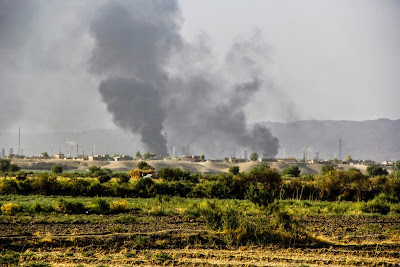 Iranian forces have taken a significant offensive role in the recent days in the fight to retake the major Iraqi oil refinery in Baiji. Iran was contributing small numbers of troops, including some operating artillery and other heavy weapons in support of advancing Iraqi ground forces. A large number of Iraqi Shia militias under the Iranian command are also taking part in the fight. The U.S.-led coalition has conducted intense airstrikes against ISIL positions in the area in the past week. (AP, 22 May)

In late March, Iranian forces withdrew from the Battle of Tikrit to protest Prime Minister Abadi’s decision to invite the U.S. to conduct airstrikes against ILIS positions in the city. With the worsening security situation in Iraq, however, the Iranians are back to provide major support to Iraqi forces in the fight against ISIL, notwithstanding continued U.S. airstrikes in the area.

Photo: Smoke rising from Baiji Oil Refinery after an attack by ISIL insurgents in a 2004 file photo (AP/Business Insider)

Slow creeping death syndrome.This was the grand plan of western powers since the suicide of 79.

Good to see we’re moving away from this, that was 27MAR15:

“The US General told the committee that he had insisted that Iranian-backed militias pull back before the US began flying intelligence-gathering flights over the weekend and dropping bombs on Wednesday.”

“I will not, and I hope we never, coordinate or cooperate with Shia militias,’ he told the Committee.”

Creeping death!?,yeah right!,thats why the west backed down on the nuclear program and agreed to negotiate,thats why western companies are lining up to do business in iran.Last time I looked isis and the rest of the wahabist lunatics pose as bigger threat to the west interests in the me as they do to irans interests.If the wests plan was as you put it a "creeping death" then it has been a resounding failure in every respect.

Anon 7:10 AM
It wasn't the west that backed down but Islamic regime in Tehran that did the backing down.Last time I looked it was the Islamic regime that has bankrupted Iran's economy which has lead to a huge underclass in Iran's recent history. Don't believe me? Go and ask those thousands of workers and teachers who are struggling to put bread on their tables what they think of the regime's priorities. On the contrary the west has succeeded in destroying the region and handing it over to terrorists like ISIS/ISIL Hezbollah and Hammas.

okay so clearly its just too embarrasing for a black democrat presidents administration to openly make it apparent to the wider US public that Iran are now our allies on the war on TERROR. Being one of only the top 5 most powerful men or women in American foreign policy, I mean the nuke deal and the medicare has got the neo conserve nazi's riled enough. Who's gonna explain to Americania right now about where Wahhabism came from and which think tanks love the Saud's and Bibi. Thou not quite so the former as much as the later! I