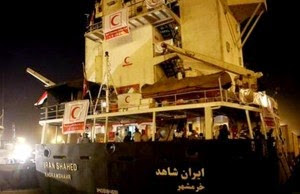 The Iranian cargo ship Iran Shahed carrying humanitarian aid for Yemen docked in Djibouti on Friday. A spokesman for World Food Program (WFP) said in Djibouti that the ship’s cargo will be offloaded and transferred to WFP-chartered vessels for shipment to Yemeni ports of Hodaydah and Aden. WFP partner organizations on the ground in Yemen will distribute the aid.

The arrangement with the UN agency ends an eleven-day saga for Iran Shahed. At first Iran had said the ship would be escorted by the Iranian warships and will head directly to the port of Hodaydah in Yemen, which is controlled by the Huthis. The move would have been a major challenge to the Saudi-led coalition blockade of the port. Senior Iranian military officers said at the time that Iran would not allow any inspection of the vessel. The deputy chief of Iranian armed forces went as far as declaring that attacking the ship will start a region-wide war.

On Monday, IRIN 34th deployed naval group, IRINS Alborz (72), a frigate, and Bandar Abbas (421), a replenishment ship, linked up with Iran Shahed and began escorting it toward Yemeni territorial waters. On Wednesday, Iran reversed course and said the ship will be docked in Djibouti instead for inspection by UN personnel, presumably heading to Hodaydah after inspection to deliver the aid. The ship was expected to be greeted by a huge pro-Huthi crowd at the port. On Friday the vessel docked in Djibouti. And now the vessel's cargo is being offloaded in Djibouti and being transferred to WFP-chartered vessels for shipment to Yemeni ports of Hodaydah and Aden. The aid will then be distributed by WFP partner organizations inside Yemen.

It was not clear if the people onboard, the medical staff, journalists, international activists, and the unusually large number of crew seen in the published photos, presumably to help distribute the aid in Yemen, would still go there or end their journey in Djibouti and fly back home.

I hope there are some assurances that the humanitarian parts of this load will get to the non GCC backed section of Yemeni society.