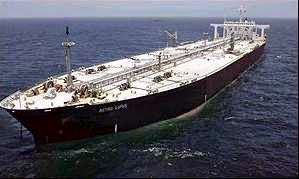 Iran said today that Russia has not been able to sell any of its crude oil cargoes. The announcement questions the viability of an oil-for-goods barter agreement that has been signed between Iran and Russia.

“The problem with the barter agreement with Russia is the fact that it has not been able to sell any Iranian oil cargoes,” said Mohsen Qamsari, the deputy director of National Iranian Oil Company (NIOC). “Russia should be first able to market Iran’s oil so that Iran could provide it with [additional] crude.” (Press TV, 9 May)

Under the barter deal, Russia was to purchase 500,000 barrels of crude oil per day from Iran in exchange for millions of tons of Russian goods a year.

some countries announce all sorts of things.....that turn out to be nothing more than bullsquirt.

these two countries are examples of that.

You will wither and never see Islamic Republic's demise

I was not the source of the news, it was reported by Iran’s own state-run Press TV, as it was clear in the post. Unless you believe that I control Press TV. Wow, but you are not serious, are you?

"You will wither and never see Islamic Republic's demise."

Depending on ones point of view this was a hilarious comment. I guess you've heard of the expression,"every dog has its day"?