Iran Warns to 'Start War' if Its Vessel is Attacked 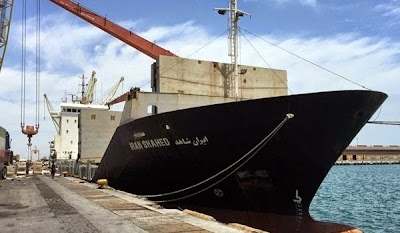 An Iranian vessel, Iran Shahed, has moved through the Strait of Hormuz and is heading toward Yemen to deliver humanitarian aid, Iranian news agencies announced on Tuesday. The ship also carries relief workers and peace activists from different countries.

The UN has set up a delivery hub in Djibouti for distribution of humanitarian aid to Yemen. Iran said the aid vessel will be protected by its navy. It was not clear why warships should escort a civilian vessel carrying humanitarian aid, unless Iran planned to send the ship directly to a Yemeni port, instead of Djibouti, to challenge the Saudi-led naval blockade of Yemen.

Iran’s semi-official Fars News Agency quoted the deputy chief of staff of the Iranian Armed Forces, Brigadier General Massoud Jazayeri, as warning today that Iran “would launch war on any state that dares to attack the Iranian ship that is on its way to Yemen with a humanitarian cargo.” (Fars News Agency, 12 May)

The U.S. said today the Iranian ship carrying aid to Yemen should change course and head to Djibouti where the United Nations is overseeing humanitarian deliveries to Yemen. The U.S. Navy is tracking the ship after Iran said it would send warships to escort the vessel to Yemen, said Pentagon spokesman Col. Steven Warren.

“We call on the Iranians to do the right thing here and deliver their humanitarian aid in accordance with UN protocols which is through the distribution hub,” Warren said.

“If the Iranians are planning some sort of stunt in the region, they know as well as we do that it would be unhelpful and in fact could potentially threaten the ceasefire that has been so painstakingly brought about,” Warren said.

UPDATE: IRIN Rear Adm. Hossein Azad told reporters that Iran's "34th Fleet" is in international waters off Yemen and has the "responsibility to protect the Iranian humanitarian aid ship."  In April, Iran deployed Vosper MK5-class frigate Alborz (72) and its replenishment vessel Bandar Abbas (421) to the Gulf of Aden. Adm. Azad's reference to the 34th Fleet was to this deployed naval group.

It is not clear why Iran Shahed would need to be escorted by Iranian warships to sail to a Djibouti port, where the UN has setup a hub for the distribution of aid to Yemen, and why would the vice chief of Iranian armed forces threatens a regional war if the iranian vessel is attacked. Why should a cargo ship heading to Djibouti to deliver aid through UN be attacked, requiring a region-wide war as a response? There is a disconnect here.

Becase its not going to djibouti,its going to a yemeni port

You are correct. Boroujerdi, as quoted by Fars in the link provided above, did not know what he was talking about. IRNA has quoted the ship's captain that the vessel is expected to reach Hodeydeh port in Yemen on 20 May. This of course explains why the ship needs to be escorted by warships.

This is not a case of Iran trying to send humanitarian aid to Yemen. They could have done that through UN hub in Djibouti. This is about Iran using the humanitarian aid to Yemen to challenge Saudi-led blockade, and in a sense daring others to board the ship to inspect it. Gen. Jazayeri was not surprisingly on the know; this is about Iran-Saudi rivalry. Let's hope he's wrong that it will lead to war.

The blockade is against international law as is the aggression of the states murdering people in Yemen. Iran has no reason not to deliver aid directly to the people that need it. They do not need permission from anyone.

It's not matter of permission from anyone. The UN has embargoed delivery of arms to the Huthis, and shipments to Yemen will be subject to inspection under the embargo resolution. Iran, and all other countries, can and should send humanitarian aid to Yemen. What they cannot do is sending arms to Yemen. But Iran Shahed is only carrying humanitarian goods, so there is no problem here, even if the ship is inspected. And Iran has said it has already coordinated the shipment with the UN. Let's hope all goes without incident.