No Negotiations Under ‘Specter’ of Threat - Khamenei 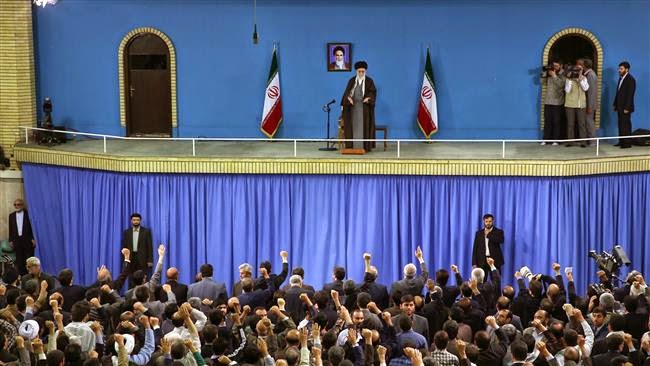 Iran’s Supreme Leader Ali Khamenei said in Tehran today that he would not approve the continuation of nuclear negotiations under “the specter of recent military threats made by U.S. officials in recent days.”

Khamenei also urged the Iranian negotiators to observe Iran’s “red lines and not to cave in to the opposing side’s imposing its will with humiliation or threats during the course of the talks.” (Fars News Agency/Press TV, 6 May)

Khamenei added that although the removal of sanctions as the result of a nuclear agreement would make resolving our economic challenges easier, but even with the sanctions not removed we still can resolve the economic problems.

Khamenei called the United States “the most disgraceful country in the world,” and said its support of Saudi Arabia’s aggression in Yemen is a proof of that. Khamenei denounced Saudi blockade of Iranian aircraft, saying Iran only wanted to supply humanitarian aid to the Yemeni people. He denied that the Yemenis needed Iranian arms and military aid. (Fars News Agency/Press TV, 6 May)

Does he mean to imply the akhoonds meddling in Yemen is over ?

So now the West and the US know where they stand. Denial is no longer an option