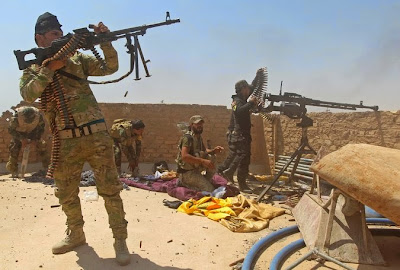 Iran-led Shia militias are leading the fight to retake Ramadi from ISIL. The city fell on 15 May after the Iraqi army fled the scene before the Islamic State fighters arrived, even though the pro-government forces vastly outnumbered the insurgents. Baghdad announced that some army units would accompany the militias in the operation to liberate Ramadi.

“The operation to liberate Anbar has started with the cooperation of the Iraqi Army and the Popular Mobilization Forces (PMF),” said Iraqi Defense Minister in a statement broadcast on state television Tuesday, referring to the umbrella organization for predominantly Iran-led Shia militias. (The New York Times, 26 May)

It was not immediately clear if the PMF would accept continued United States airstrikes in the area and close air support to the militia and Iraqi forces. In the last phase of the Battle of Tikrit in late March, the Iranians pulled out from the battle to protest Iraqi government’s decision to invite U.S. air support after the Iran-led offensive had stalled for more than three weeks.

Note: In an unfortunate sectarian move by the militias, the operation to liberate the predominantly Sunni city of Ramadi was codenamed “Labbaik Ya Hossein,” (We Are Here for You, Ya Hossein), calling for Imam Hossein, the revered Shia Imam, and a battle cry of Shias (against Sunnis). Sectarianism might win battles against ISIL, including in Ramadi, but if the Iran-led coalition wants to win the support of the Sunni populace and with it the war against Sunni extremism, it cannot act in such divisive way. Extremists cannot be defeated by extremism. Preserving the sovereignty of Iraq should be the goal, not what happened in Karbala some 1,400 years ago.

Photo credit: Shia militias during an operation at Baiji Oil Refinery; 25 May 2015 (Ahmad Al-Rubaye/AFP)
Posted by Nader Uskowi at 10:00 PM

I see your point, but what can be done now that the Iraqi army has proved, more that once, incapable of fighting or pushing back a battle-hardened, merciless militia like ISIS?

The PMF might be a sectarian force, but it's the only force capable of dealing with ISIS. I don't care what code names they give to their military operations, Iraq needs them more than it needs U.S-led airstrikes. Once ISIS is fully defeated, efforts to rehabilitate the PMF morally will have to be on both the Iraqi and Iranian government's agendas.

Arab armies are simply incompetent. Iraq and Syria are good examples. It is only with the help of Iran-led ground forces that both countries have succeeded in retaking territory.

The organizers of the operation, Quds Force's Soleimeni and Badr's Amiri should know better than that. There were many appropriate codenames they could use for an operation in the Sunni heartland.

The point here was not lack of competency of the Iraqi army, I began the post by saying how the troops fled the scene even before ISIL fighters got there. The point here was inflaming sectarianism, and intentionally, by picking such a codename. The leaders should realize this approach will come back and haunt them. I do believe you cannot fight extremists with extremism.

Yes of course, I agree, they should at least have tried not to make it look like a sectarian battle, even though we all know it effectively is.

"In the last phase of the Battle of Tikrit in late March, the Iranians pulled out from the battle to protest Iraqi government’s decision to invite U.S. air support after the Iran-led offensive had stalled for more than three weeks."

It's important to point out the context of that stand-down. The Iran-led stand-down took effect in response to the U.S. position, ultimately articulated in public by GEN Austin. From Aljazeera on 27MAR15:

"The US General told the committee that he had insisted that Iranian-backed militias pull back before the US began flying intelligence-gathering flights over the weekend and dropping bombs on Wednesday."

"Hanan Fatlawi, a Shiite lawmaker who is one of Mr. Abadi’s most vocal critics, said: 'Previously, you could divide the Shia into two sides: those who hate Iran and those who love them. But after the entrance of ISIS, and with the situation we are in, many people are grateful to Iran. Their opinion changed.”

"Of the militias, she said, 'Without them, there would be no Baghdad.”

"There is an essential paradox to Mr. Abadi’s leadership thus far. In nearly every way he has proved to be the inclusive leader mandated by the United States, reaching out to Sunnis and Kurds and seeking consensus. But within Iraq, he is increasingly viewed as weak and unable to effectively shift Iraq’s tragic trajectory."

“This term ‘inclusive personality,’ I only hear from foreigners,” Ms. Fatlawi said. “He was weak from the start.”

That's not an accurate reading of the events in Tikrit. GEN Austin might have hoped not to coordinate or cooperate with Shia militia, but he did provide air support to the offensive, as he is doing it today in Ramadi. Gen. Soleimani was the commander who ordered Quds Force personnel and Shia militia forces reporting to him to pull out of the battle to protest air strike. The point here is the success of the battle should not been subjected to ideology.

On sectarian nature of codenaming the operation 'Laybek Ya Hossein': The point is not whether Iraqi Shias are in love with Iran or not. The point is the Shia leaders of the operation in Ramadi, people like Gen. Soleimani and Badr's Amiri should have known better not to put such codename on an operation in the Sunni heartland. Iranians and Iraqi Shias need to win the support of the Sunni populace in Anbar and Mosul to win the war against Sunni extremism. Battles can be won with sectarianism codenames, but war against Sunni extremism cannot be won by Shia extremism.

You think Iran can ever win back the hearts of Sunnis in Iraq or anywhere else in the Arab world after what Assad has done? Every time Abbadi tried to do that he was faced with excessive demands from Sunni parties/tribes who sometimes wanted him to end military operations against ISIS-controlled Sunni regions or even give Sunnis political autonomy like Erbil (dividing the country, that is)!

I know Sunnis have been marginalized after Saddam had made the lives of Shias and Kurds miserable before the invasion (and for almost 3 decades), but it's too late to fix that now with Sunni tribes supporting ISIS and the dissolved Ba'ath party (just ask Ali Hatem, the head of the Sunni Dulaim tribe, what he wants from the Iraqi government in return for fighting ISIS, which I don't think he would do anyway!).

I hope I'm wrong, but the reality on the ground today leaves little room for politics. Maybe after the war is over, the Sunnis can be given more rights so that another sectarian war is averted, but today's war has to be fought, not negotiated.

Sadly its not a lack of complacency but outright treason thats at work here,a lot of the sunnis appear to actively support isis or at least prefer it to a shia led democracy,pandering to sunni sensibilities at this point in time when it is the shia militias that are the only military hope for salvaging the situation is laughable it is up to the sunnis to prove their loyalty now

Nader, I think we're saying the same thing with regards to GEN Aurstin, the Shia militias and Soleimani.

Yes U.S. air support was provided during last phase of Battle of Tikrit. And yes, GEN Austin said those remarks to Congress. And yes, the Shia militias stood-down, citing a "command dispute."

I said at the time the command dispute made no sense, militarily. But our American reasoning at the time was objective of pushing IRGC-QF from its command role in Iraq, citing "Iraqi sovereignty." That's where the Iraqi MP's above comments come into relevance. That's not how a significant segment of Iraqi society loyal to the Baghdad government see it.

Anyway, it will be interesting to see how this Iran-led operation plays out. The Iran-led forces mobilized a lot quicker than Tikrit, where the long time ISIL occupied Tikrit they were able to prepare and fortify.

It is precisely the avoidance of all-out religious in the ongoing conflicts in the region that should be subject of political will at this time, not after the wars already turn into religious wars. Leaders of both sides of the sectarian divide need to tone down their rhetoric. Religious wars are easy to start, tough to end. In Northern Ireland it took 35 years to negotiate a ceasefire. You cannot just hope that after the wars problems will be solved. They have to be addressed by the politicians now.

Yes, treason by some Iraqi generals and infiltration by ISIS is in fact another major problem that faces the Iraqi military. Thank you.

Nothing wrong with PMF fighting under the command of the country's prime minister to safeguard the country's sovereignty, even if a significant segment of Iraqi society feel fine with having a foreign general to run their military operations. But I guess it's already too late for that.

I too like to see how this battle plays out. If Tikrit is any indication, ISIL will withdraw from Ramadi when faced with some 25,000 well-armed militia members and will try to overrun another town a later date. I don't expect them to fight to keep all of Ramadi, except probably those areas around the city where they had strong presence before occupying the whole town.

Nader UskowiMay 27, 2015 at 5:57 AM
Its a fine sentiment but alas far too late for such things,isis made this a sectarian war when it and its various allies and associates started murdering and enslaving anyone who wasnt a sunni and the even sadder fact is that despite isis murdering plenty of sunnis there seem to be plenty of sunnis who support isis and who would have no problem living in its [insane] caliphate,now perhaps after isis is destroyed and the sunnis are made to realise that their only choices are either being a part of shia majority democracy or being thoroughly marginalised with no say in anything then perhaps those fine sentiments can be realised,but until then the sunnis must be firmly disabused of the notion that there are any other options available to them and it must be made crystal clear to them that siding with isis will only bring more destruction and marginalisation upon them

That's precisely why this conflict should be turned into a war against extremism, and not a Shia-Sunni religious war. We should hit ISIL for what it is, a terrorist extremist group that so happens to be a predominantly Sunni group. The struggle between extremism against moderation in Islam is far more important than the struggle over who should have succeeded the Prophet nearly 1,400 years ago.

Nader Uskowi, I sure hope you're right and that Sunnis in Iraq find a good reason to fight ISIS, because so far they don't have it.

For now, the Iraqi government changed the name of Ramadi ops to "Labbaik Ya Iraq." One step at a time!