IRGCN Boats Fire Shots Across the Bow of Singapore Freighter

In Persian Gulf Off UAE Coast 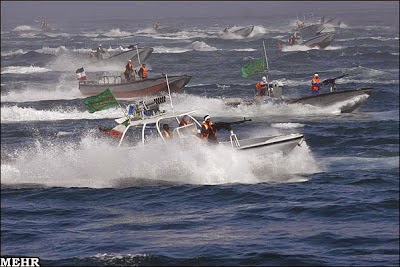 Five IRGC Navy fast boats today fired shots across the bow of a Singapore-flagged cargo vessel, the Alpine Eternity, in the Persian Gulf in an attempt to stop the ship.

IRGCN boats approached the cargo vessel in international waters just off the coast of the United Arab Emirates at around noon local time and fired across its bow, and at that point the cargo vessel turned and escaped by entering into UAE territorial waters, CNN reported according to initial U.S. military reports of the incident. The UAE sent three of its coast guard boats out to the cargo vessel.

The IRGC navy has been following an aggressive policy in the Persian Gulf in recent weeks. Late in April, it intercepted a Maersk cargo ship at the Strait of Hormuz and detained it for nearly 10 days. There have been other reports of harassment of cargo ships by IRGC fast boats since then. Today’s incident was serious, talking place near the UAE territorial waters and prompting UAE navy to send out coast guard boats.

It seems the IRGC is angry over the Saudi-led coalition’s enforcement of UN arms embargo against the Huthis in Yemen. Last month, a nine-ship convoy of IRGCN suspected of carrying arms for the Huthis had to change course and head home. Iran is now sending a humanitarian aid vessel to Yemen, but the Iranian foreign ministry has coordinated the aid delivery with the UN and there are no indications that IRGCN warships are accompanying the ship.

"It seems the IRGC is angry over the Saudi-led coalition’s enforcement of UN arms embargo against the Huthis in Yemen."

According to Associated Press...

"The U.S. official said the Alpine Eternity is involved in a financial dispute with Tehran. The Alpine Eternity on March 22 accidentally struck an Iranian oil platform, damaging it. The ship, which also was damaged in the accident, went into port for repairs, and during that period the Iranians informed the shipping company that it must pay for damage to the oil platform."

Countries do not send out their navies to fire across the bow of cargo ships to detain them for financial reasons; this is very unusual, ships are arrested at docks not on high seas for financial liabilities. Iran could go to a Singapore court and arrest the vessel while at dock there. IRGCN are not the sherifs or gendarmes of the Iranian judiciary. And especially during a period of heightened tension.

Financial liabilities are but an excuse to show force in the Persian Gulf. I do believe that after the return of the nine-ship convoy, and now after Iran needed to go through the UN to send humanitarian aid to Yemen, IRGC's pride is wounded. Expect more of these incidents in the coming weeks.

the Iranians really seem to be on a path that will lead to them getting their dinky little navy blown into little pieces.

It hasn' t reached Yemeni port yet. ETA 20 May.

I know. But it's still going there despite its coordination with the U.N, isn't it? I mean it's not going through Djibouti.

If so, and if they're entering Yemen's territorial waters anyway, I don't see why they should be angry.

That's what the Iranians are saying, that the ship is heading to Hodeidah through coordination with the UN. Going through the UN, which has put the embargo in place, is a right thing to do and does not constitute a challenge to the blockade. Let's hope Iran Shahed offloads its humanitarian cargo without any incident.

The original announcement by Iran's senior military officers was that Iran Shahed will go to a Yemeni port, with IRIN providing military escort, and no mention of going through the UN. Cooler heads have prevailed.

But it didn't rule out the UN option either. All that Iran wanted was for the ship to be allowed to dock at Hodeidah (under Houthi control) rather than Djibouti where everybody else is sending their aid.

If all goes well and the ship does in fact dock at Hodeidah and then return to Iran, Iran will have (for the first time since the war) established direct contact with the Houthis. Pretty much what they wanted to prove.

Like you, I hope all goes well and that the Saudis aren't silly enough to interfere with a UN coordinated humanitarian ship.

Iran, or any country for that matter, should be able to send aid ships to Hodeidah, the largest port in the country. It's good of Iran doing so. What they can't do, and tried it in April but failed, hence the anger, is sending convoys escorted by IRGCN to deliver arms and military equipment to the Huthis. And this is what Iran really wants, to be able to establish direct shipment of arms and equipment to the Huthis, by sea and air. Going through land via Oman is not all that simple. The UN embargo and coalition blockade are of course meant to prevent those types of shipments.

This particular shipment, Iran Shahed, is not carrying arms and UN is right to allow it in.

By who exactly?,none of the gulf navies have the firepower to take on the iri naval forces and I very much doubt that the us is going to risk a war on behalf of the gulf states when they are so close to a potential nuclear deal with iran

there is no deal to date and with or without one the US isn't going to allow the Iranians to continue to shoot at unarmed vessels in international water for no good reason.

Iran's little games are simply sad and small and criminal and nauseating.

So the us is going to start a war with iran over this when it wasnt willing to try and start one over irans nuclear program,yeah right!,go back to sleep.The simple truth is this neither the us nor the gulf states will do anything that could risk a regional war especially at this point in time