Imagery from 26MAY15 of Popular Mobilization Forces (PMF) weapons and vehicles at al-Nibaie during "Operation Labyek Ya Hossein": 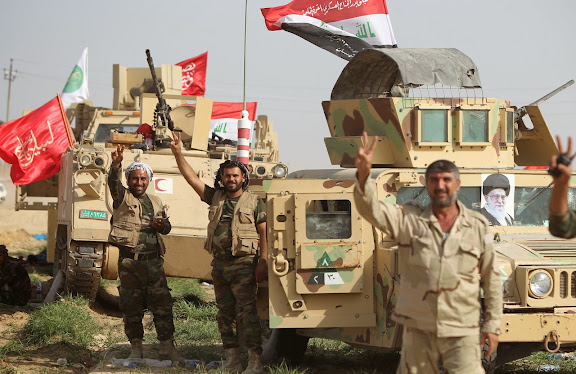 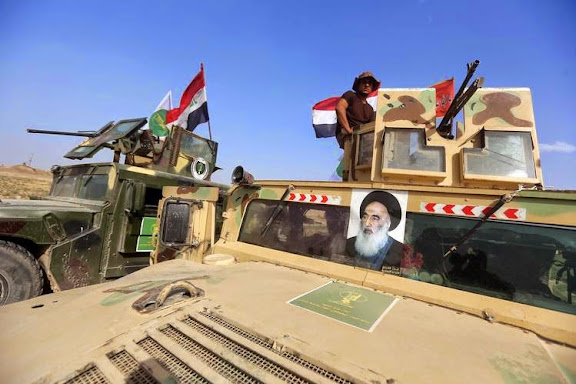 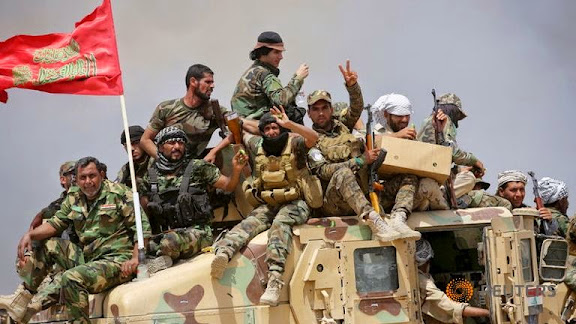 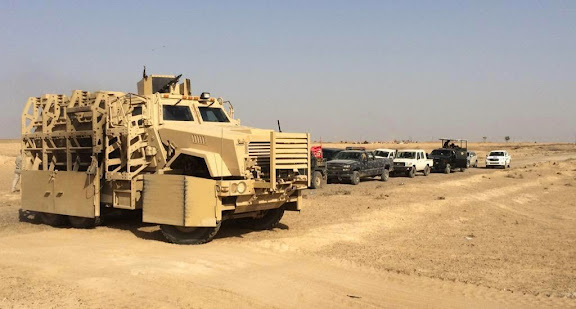 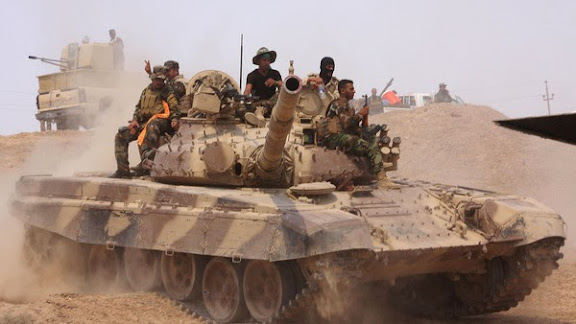 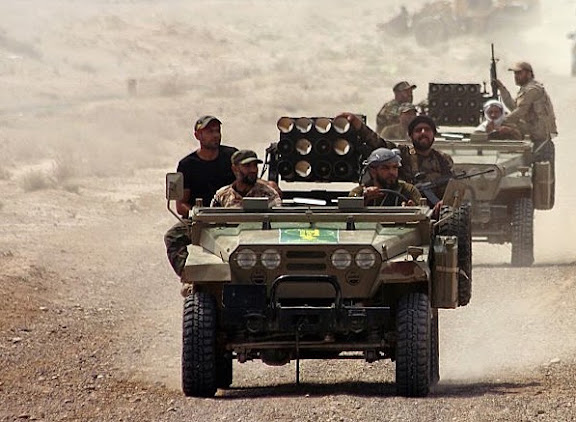 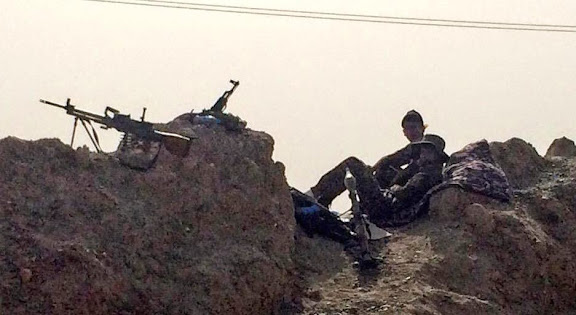 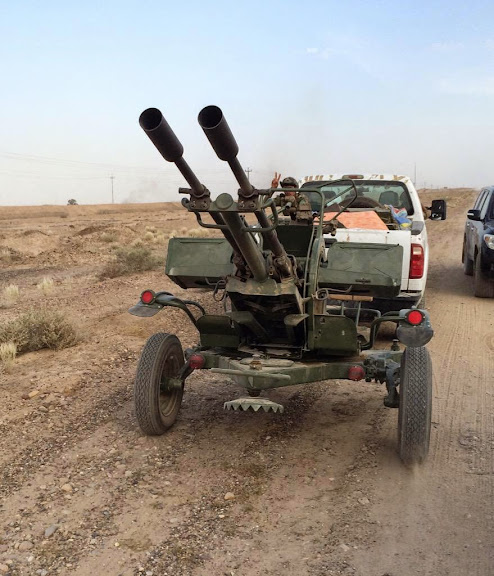 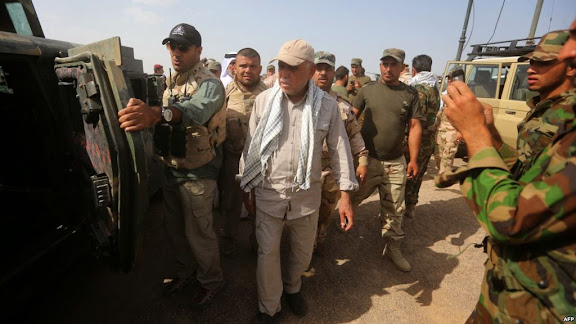 I certainly hope that the Iran-led coalition could push ISIL out of Ramadi, and sooner the better. But one of the photos published here is of serious concern. It shows militia members raising the red banner of ‘Labyek Ya Hossein,’ calling for the acceptance of the revered Shia Imam Hossein, in a battle in the Sunni heartland. The same photo also shows the militia’s truck adorned with image of Ayatollah Khamenei, the head of state of Shia Iran and not Iraq. And this is not a military column sent to defend Karbala, but to liberate Ramadi. Really? How blatantly sectarian can you get to prepare for the Battle of Ramadi with these symbolism?

Shia extremists can win battles against ISIL, including in Ramadi, but cannot get the support of Sunni populace to win the war against the growing Sunni extremism. The government of Iraq should tone down blatant sectarian overtones to this conflict to avoid an all-out religious war.

Operation Labyek Ya Hossein translates to "Operation Here I am, O Hussein.”

I'm obviously not an Islamic expert. But Juan Cole seems to provide a reasonable rendering:

By the events following Battle of Tikrit, it doesn't appear our American-advocated solution is workable. So the Iraqis seem to have decided in favor of the Iran-led approach, again.

Have to say, following the command dispute at the late stage of Battle of Tikrit, the PMFs and even elements of the Iraqi Army appear to now double-down in throwing their lot in with Iran. I agree, it's unfortunate, but I did say back then that attempting to maximize U.S. military influence in Iraq by leveraging application of air power in order to attempt a push-out Iranian military influence, represented a faulty policy that would be counterproductive towards the goal of defeating ISIL. I recall our American offered rationale was assertion of "Iraqi sovereignty." Doesn't appear the Iraqis viewed it as such, especially following the loss of Ramadi.

With all due respect to Professor Cole, this slogan is sectarian to the extreme. It's used in the context of the Battle of Karbala some 1,400 years ago. And it's the battle cry for the Shias. PMF, however, was supposed to be a national guard-type organization. But these are the realities on the ground, probably too late to organize a non-sectarian national guard.

On the battle itself, I expect ISIL to withdraw from most of the city and start planning to hit in another town. If Tikrit was an indication, they will not hold city center at a high price. Hope the offensive force does not allow them to escape so easily.

Thank you for providing such a well summed up comment. It is precise and right to the point. Baghdad must win over the populace in Anbar for there to be any chance of enduring peace. This should be as much a campaign of winning the battle of hearts and minds amongst the Sunnis, as it is of military battles against ISIS.

nader nothing comes free!! I'm not saying you're not right that the PMFs should not use such battle slogans but the honest truth is that if Ramadi sunnis want to be "free" they might have to just take whatever they got. beggars cant be choosers. ur so utopian!

I am glad the Iraqi government does not think like you! They just renamed Ramadi ops to 'Labbaik Ya Iraq.'

Its up to the sunnis to defeat the extremists in their own ranks,if they are unable or unwilling to do this then why should the shia bend over backwards to avoid "offending" the sunnis let alone spill blood/sacrifice lives to defeat the sunni isis,its up to the sunnis to first accept that they are no longer in charge in iraq and that supporting isis will only make things worse for them and secondly they need to prove both their loyalty to the government and their willingness to defend it.The government shouldnt have to "win" the sunnis hearts and minds,if the sunnis are so blinded by sectarianism that they cannot see that siding with isis will only worsen their lot then they deserve what they get.

You own words are the best illustration of how extremism has grown to dominate the conversation among both Sunnis and Shias. With your brand of sectarian extremism, albeit the Shia version of it, we will not be able to win the war against Sunni extremists. Battles can be won, but we will lose the war.

you have a wrong understanding of the pictures. The shia welcome the sunni population. A lot of sunni people who fled isis escaped to kerbala where the shia dominate. The shia religion leaders do not use sectarian politics. They try to unify. latest fleeing sunni people have been welcomed by shia politicians with water and food supply to show them they are with them. Sadly saudi arabia and countries like that which work with the zionist entitiy try to spread sectarian politics so that they can survive their messy politics. regarding the pictures they are religious sacrilegs of all muslims or do you not love hz. Ali is the cousin of the prophet muhammad. And Hussein the son of ali and married with the daugther of the mohammad Fatimah. How can this disturb any muslim regardless whether sunni or not. You should feel pride about it. Do not think they belong to shia islam their are the roots of islam. The shia fight for islam. For a free and strong islam. The sunni are our brothers and their sisters our dignity. We will protect them and fight for them. Our souls are not sold to zionism and we will not betray our brothers. We fight isil and islamist facist who kill muslims. They have nothing to do with islam. Their masters are the zionist.
Do not afraid us we are brothers

I also follow developments in Iraq and do believe the conflict has real disturbing sectarian overtones, increasingly so after the Shia militias retook Jurf al-Sakhr last winter and Tikrit las March. I am sure there are sunnis who have gone to Karbala and welcomed there. I am talking here about the trend during the conflict. You probably want to ask the question of why the Tirit residents who fled ISIL are not going back to their own hometown. Or why so many Sunni homes were destroyed in Jurf al-Sakr.

The problem with sectarian conflicts and religious wars are that when they start it would be very hard to end. Both sides in the sectarian divide should be careful not to push sectarianism in Iraq. That's exactly what ISIL wants.

When a Shia militia force puts the name of "Ya Hossein" on its operation to free Ramadi, a predominantly Sunni town, it's a problem. Not that Hossein wasn't the grandson of of the Prophet, because that was not the reason they named the operation as such, and was not taken by Sunni to mean they just called the military operations after the Prophet's grandson. It was named to inflame sectarian conflict, and that's the only way we need to look at it. The photo too, is a all-out symbol of sectarianism; not because of what it says, but because of how it was meant to be used.

Also most of the faults about the messy situation in the region falls on the shoulders of Muslims. Let's not pretend that Muslim societies are not facing serious issues, and all is the fault of the "zionists'" as you state. Muslim should be courageous enough to take real responsibility for the current situation.