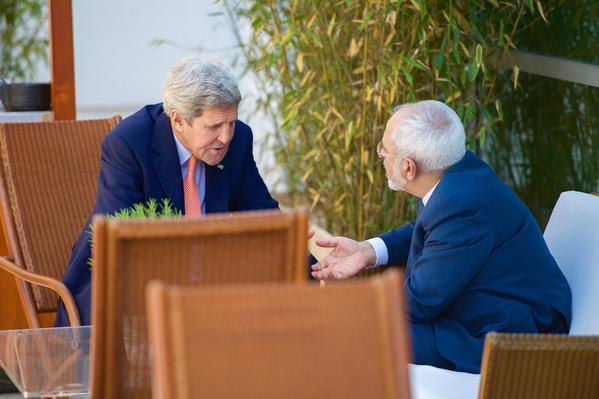 UPDATE: It was a shorter than usual meeting between Kerry and Zarif. There were no reports of progress after the meeting. Kerry just tweeded that the meeting was “another chance to speak directly with FM Zarif.” The talks will resume in Vienna on Thursday at deputies and experts level.

Kerry later described the latest round of talks with Zarif as "very constructive."

Secretary of State John Kerry and the Iranian Foreign Minister Javad Zarif are meeting today in Geneva to address issues that could prevent a final nuclear agreement by the 30 June deadline. IAEA on Friday issued a harshly worded report saying its probe into possible military dimensions (PMD) of the Iranian nuclear program has been stalled, raising questions if it could produce its findings on the issue before 30 June.

Meanwhile, Iran’s deputy foreign minister and senior nuclear negotiator Abbas Araqchi told Iran’s state TV today that IAEA’s inspections of military sites are “out of questions,” reiterating earlier warnings by Ayatollah Khamenei, the country’s supreme leader. The problem is the IAEA might require the access to military sites suspected of carrying work on nuclear weapons in order to issue its findings on PMD allegations; and those findings are needed before a final agreement is reached. It’s a problem.

But both sides have said they hope to reach the final agreement by next month, although Araqchi today warned that the deadline might need to be extended.

Problem is Zarif discredited himself and the team he leads by claiming that,"there are no political prisoners in Iran." How can such a man be believed? Broken vases comes to mind.

Zarif could not admit that there are political prisoners in Iran, if he did many in Iranian establishment will attack his main project which is the nuclear issue. He maintained focus on the nuclear issue which is the right thing to do. This upset many people specially the opposition their reaction towards Zarif was negative which increased his credibility amongst the hardliners. Remember Zarif is not an elected politician if he is too popular and appears close to reformists it hurts the nuclear issue and the reform agenda. They are people in Iran who are in a position to fight for human rights like Dr Aref, Mr Motahari, Mr Rafsanjani, Hadi Khamenei, Hasan Khomaini, Mr Khatami, Dr Khatami and many others after the nuclear issue is solved and sanctions are relaxed.

Please say you were joking? Because if these are the people which are fighting for Iran's "human rights" then god help us.

@Anon 4:04 May 30, Zarif had no need to tell such a big lie. He was asked about jason Rezaian and he could have diverted the question easily without the lie but he decided on such answer. What I saw in the interview was not a deception to safeguard the talks as you say but someone who believes that this is really true. In other words Zarif with all his talents is still a Velayat brainwashed pawn.