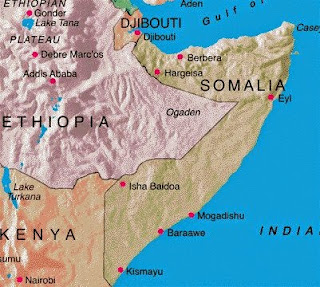 IRIB, Iranian state television, is reporting 14 crew members from an Iranian fishing vessel have been kidnapped by the Islamist group al-Shabab off the coast of Somalia. The station said the incident happened on Wednesday without elaborating.

It was not clear why the Iranians were fishing off the coast of Somalia. IRIB did not give a more exact location, but Somalia’s coast stretches from the Gulf of Aden bordering Djibouti, across from Yemen. An Iranian deployed naval group, which includes a frigate, is near Gulf of Aden. It was not known if the naval group deployed to prevent piracy was searching for the kidnapped Iranians.

Al-Shabab is a Somalia-based extremist group with ties with al-Qaeda.

Lets go hiking in Syria. Same as going fishing near the coast of Somalia.

perhaps the glorious Iranian navy and it's tugboats, toy warships, inflatable motorboats and large rubber ducks was too busy pretending to be guarding things near Yemen to guard anything near Somalia.