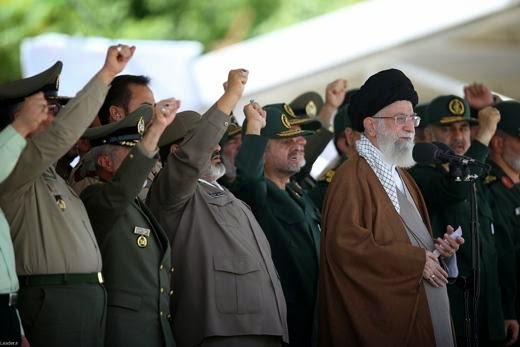 Iran’s Supreme Leader Ali Khamenei said today he will not allow any inspections by foreigners of its military base.

“They (P5+1 countries) are making new comments in the negotiations. Regarding the inspections, we have said we will not allow foreigners to carry out inspections of any military sites,” Khamenei said. “The enemies should know that the Iranian nation and officials will, by no means, give in to excessive demands and bullying,” he added.

Khamenei made the remarks at the commencement ceremony at Imam Hossein Military Academy in Tehran. The issue involves IAEA’s evaluation of possible military dimensions of Iran’s nuclear program at Parchin military base in Tehran. The evaluation and IAEA report is part of the requirements of a comprehensive nuclear agreement.

Don't allow these people to fool you. Just like Khameini's and IRGC "Hart-o-Poort" regarding Iran's ship directly delivering "humanitarian aid" to the port of Aden in Yemen,they will buckle and allow inspectors into military sites. These people are the biggest sellouts in the history of Iran zamin.